The FL Stands For Failing League 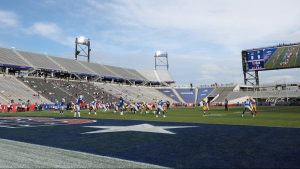 Do you ever hear anyone talking about the USFL?

I came across one of its games this weekend and, during the five minutes or so I watched, I noticed there were very few shots of fans in the Birmingham stadium that’s home to all the games. Then there was a long shot from the end zone — and to call the stands sparsely-populated would be overestimating the crowd.

I’m pretty sure there were more people watching my brother-in-law play pickleball this weekend than at that USFL game.

How many times are investors going to fall for this, a product that is nowhere near the level of college football, let alone the NFL? You know the expression,  “Fool me once, shame on you, fool me twice, shame on me”? We’re well past twice.

There was the World Football League, which played for two seasons in the mid-seventies. The original incarnation of the USFL — which was doomed as soon as Donald Trump signed on as a team owner — stumbled through three seasons in the eighties.

Vince McMahon’s XFL, which was going to shake up the game by being bombastic and loud, lasted a single year, 2001. A new version with the same name debuted in 2020 and made it all the way through week five before the whole thing fell apart.

Who even remembers the United Football League or the Alliance of American Football, both of which limped back into the locker room as they failed miserably, too?

The ones who are repeatedly fooled by these NFL wannabes are the TV networks. Somehow, the brain trust behind the USFL (like their predecessors in other rival leagues) has convinced several channels to carry its games. Sure, those outlets need content 24/7, so any live sport that will fill a couple of hours helps, but the USFL’s ratings must be miserable. You know your league has a tough uphill climb when your viewership falls somewhere between coverage of cornhole, ax throwing, and those recorded automobile auctions.

The cable sports geniuses might be better off pointing their cameras at the pickleball courts.