The Enduring Legacy of Pete Seeger 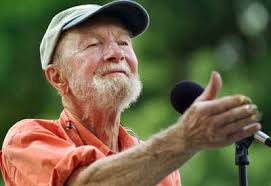 I have sung in hobo jungles, and I have sung for the Rockefellers,
and I am proud that I have never refused to sing for anybody.

That’s how Pete Seeger described himself at the top of his Twitter page. It is a line from his 1955 testimony to the House Un-American Activites Committee, in which he refused to name names (see the remarkable transcript here).

What he didn’t say was how often he got us to sing with him.

Pete died yesterday at 94, but his music and influence have and will continue for generations. In my family, they extend from my mother sitting in a New York apartment listening to Pete and others play and sing. Songs she then taught me and my brother as very small boys. Songs we then taught to our children. The arc of Pete’s influence flowed not just through his audiences but through other singers and songwriters, from Bob Dylan to Bruce Springsteen to John Mellencamp, who introduced Pete last summer at the Farm Aid ’13 concert.

That day, as he had thousands of times before, Pete got the crowd to sing along. The joy of singing with others is a big part of Pete’s legacy, but so is his social activism. Pete was always ready to raise his voice against injustice.

The civil rights movement would not have succeeded if it hadn’t been for all those songs. People hummed them when they were most beaten.

Considering the role Pete had played in the civil rights movement, marching with Dr. King and leading crowds in “We Shall Overcome,” I can only imagine the thoughts that went through his head as Pete and Bruce performed “This Land Is Your Land” on the steps of the Lincoln Memorial on the eve of President Obama’s first inaugural (which Pete agreed to do only if he could sing all the verses of Woody Guthrie’s classic protest song).

My own growing up in the sixties in towns scarred by race rioting made that moment nearly unbelievable and Pete had thirty extra years of struggle and real activism on his belt. He was so happy that day, it was like, Pete, you outlasted the bastards, man!

— Bruce Springsteen at a 90th birthday celebration for Pete Seeger.

I saw Pete perform at rallies against the Vietnam War in Washington, DC. I saw him perform “Waist Deep In The Big Muddy” on the Smothers Brothers’ show after CBS censors tried to keep him off the air. I heard him sing to raise money for the Sloop Clearwater, a project he started to try to clean up the Hudson River. I heard him sing pro-labor songs that stretched back decades into the struggle for America’s working men and women to be treated and paid fairly by their employers. I admired the fact that he was held in contempt of Congress for refusing to name names in the McCarthyism era — when Congress itself was more contemptible than it is now, as hard as that is to believe.

In our house, we often sang Pete’s songs, and when I took guitar lessons beginning at age 8, many of the first songs I learned were his. I was thrilled when my daughter was old enough to sing along with “Goodnight, Irene” and “Tzena Tzena Tzena” as we watched “Wasn’t That A Time,” the documentary about The Weavers, the folk quartet made up of Pete, Lee Hays, Ronnie Gilbert, and Fred Hellerman. She also grew up on Peter Paul and Mary’s children’s music, thanks to their association with Pete.

This morning, when I broke the news of Pete’s death to her, my daughter launched into “Where Have All The Flowers Gone?” and I joined right in. Just as Pete would have wanted us to.