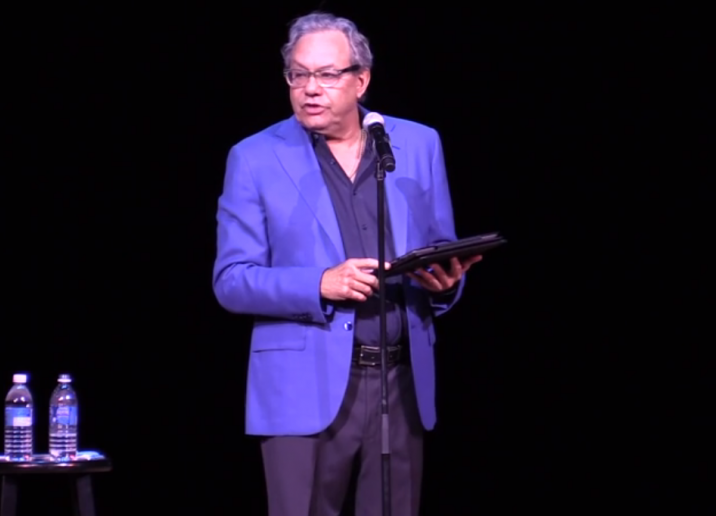 My wife and I had looked forward to seeing Lewis Black at the Peabody Opera House Saturday night. We’ve been fans of his “Back In Black” segments on “The Daily Show,” and enjoyed him opening for his friend Kathleen Madigan at The Pageant several years ago.

Unfortunately, his Peabody show just wasn’t funny. Sure, Black ranted and juggled his jowls and pointed his fingers in anger, but there were no punchlines. He had plenty of topics to discuss (e.g. presidential candidates, climate change, colonoscopies, building sports stadiums with taxpayer dollars), but he sounded less like a comedian and more like an angry guy on a bus loudly expressing his point of view to everyone within earshot. Time and again, he’d take off on one issue, raise his voice to a crescendo, and then leave us hanging with no payoff.

As he’s done at other stops on his tour, Black finished by answering questions submitted by the audience in a segment that he streams online (video and audio). Comedy improvised in the moment is rarely as good as a bit that’s been written, re-written, tried out, re-written again, honed some more, and then put into the act permanently. This was no exception. Some of the queries seemed like good jumping off points, but never landed anywhere. The best one was a rant submitted by an audience member who was sick of people who prayed for his sick aunt but wouldn’t donate money to help her — it received a rousing ovation from the crowd, but Black did nothing more than read it to us without any followup.

I had a similar problem with George Carlin in his last decade. He was still clearly able to identify topics worthy of his commentary, but couldn’t turn them into anything other than angry recitations of the problem without adding a touch of wit, a punchline, or any sense of a comedic resolution.

On the other hand, Black’s opening act, John Bowman — who has toured with him for years — was very good. I was surprised that Black had another topical comedian opening for him, but Bowman’s bits were much funnier as well as more localized (he went on for several minutes about the rivalry between St. Louis and Kansas City, where they had performed the night before). Bowman also did a few song parodies on his electric ukelele (!) that were clever, quick, and funny. He built the crowd up nicely — but then there was a 15-minute intermission so the audience could go to the lobby and buy Lewis Black bobbleheads — and by the time the show resumed, any momentum Bowman had built up was gone.

It’s rare that the opening act is more enjoyable than the headliner, but that was the case Saturday night.