The Day Of The Dolphin 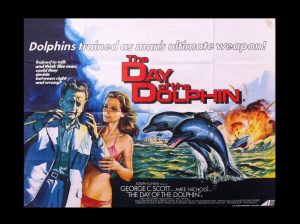 In 1973, Buck Henry wrote and Mike Nichols directed “The Day Of The Dolphin,” starring George C. Scott and his wife, Trish Van Devere, as marine biologists teaching dolphins to talk and interact with humans. The story got stupid when they discovered some bad guys wanted to train the dolphins to carry and attach explosives to naval vessels, including in an attempt to assassinate the President of the United States.

The movie didn’t do well at the box office, but only left a little smudge on the careers of its principals, who already had resumes full of classic movies and TV shows.

Why do I bring this up today? Because of a story in The Daily Beast headlined, “Putin Deploys Top-Secret Attack Dolphins in War on Ukraine.” It opens with these two paragraphs:

Russia is using militarized marine mammals to protect a key Black Sea naval base, according to multiple reports. Satellite imagery shows what military experts believe are two dolphin pens floating off the mouth of its key navy base in Sevastopol harbor off Crimea.

Military analyst H.I. Sutton first broke the news in the USNI military outlet after analyzing current and archival satellite imagery which he says show that the pens were put there in February to coincide with Russia’s invasion of Ukraine. Russia keeps some of its most important military hardware at the base and the dolphins are likely trained for operations that would counter enemy divers or retrieve explosives to protect the port.

There has been no comment from Putin’s spokes-porpoise, Flipper Plovets.