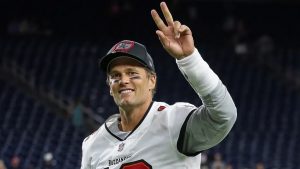 The NY Post reports that, whenever he’s done playing in the NFL, Tom Brady will move to Fox Sports as the analyst on its number one football broadcast team. He’ll work with play-by-play announcer Kevin Burkhardt, who will be paid considerably less than the $375 million Brady will get over ten years. That’s more than CBS’ Tony Romo and ESPN’s Peyton Manning make — combined. It’s also more than the cumulative total of Brady’s earnings over his 20-year career on the field.

Don’t get me wrong. I’m not jealous of Brady. But no one knows if he will be very good in the booth, since he hasn’t done a single game yet. I know a lot of broadcasters (including me) who were thrilled to get five-year deals, and that was after we’d proven our ability to get big ratings.

Will Brady’s presence bring in massive numbers of new viewers dying to hear his analysis? I don’t know that anyone — besides John Madden and Howard Cosell — has been a big enough personality to attract an audience that was otherwise uninterested in the matchup. There might be an increase in viewership for Brady’s first couple of games, but who will care about a Giants-Chargers game he’s working in the late Sunday afternoon window on Fox in the third year of his contract?

There have been broadcasters who affected my football viewership. A few years back when the Rams were still in St. Louis and stinking up the place, we got Dick Stockton calling the game every week, at a time when he was long past his peak. As soon as I heard his voice, I dove for the mute button. Similarly, I have never been able to stand Joe Buck and Troy Aikman, especially when the latter repeatedly offered brilliant remarks like, “The Packers are going to try to move the ball down the field with a combination of runs and passes.” With that duo leaving Fox for ESPN’s Monday Night Football, I guess I’ll have another weeknight free.

Of course, the trolls came out on Twitter to denounce the Brady deal. I saw more than one comment along the lines of, “Do you know how many poor people that much money could help?” As if Fox had designated the millions for public assistance, but changed its corporate mind to divert the funds to Brady.

These aren’t tax dollars, after all, and not a penny of it comes out of your pocket. Keep in mind that the money will do some good, as we no longer have to worry about how Tom and Gisele will make the mortgage payment.

On their fifth house.