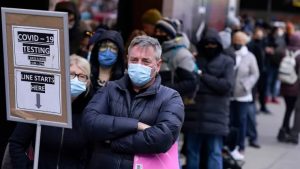 My daughter spent over four hours shivering in the New York cold yesterday waiting to get into an urgent care outlet for a COVID test. Four hours. That was after she’d gone to three other places Friday and two more Saturday, only to find they all had lines extending around the block, with signs at the end saying they were all booked up and no one else would be tested.

She needed to be checked because she’d received a proximity warning from her iPhone app, which said she’d been within six feet of someone with COVID for more than ten minutes. It’s technology designed by Apple and Google to help with contact tracing without violating anyone’s privacy or revealing their locations. I wish we had it in Missouri, but because science deniers run our state legislature, we don’t.

I’ve given up on the vaccine refusers, but when even those who’ve been responsible (i.e. gotten the shots and boosters) keep running into such obstacles to containing the disease, I shake my head at the continuing lack of common sense nationwide public health policies.

Hopefully, my daughter will test negative and be able to come visit us later this week, but with the spike in cases in New York (driven almost entirely by the unvaccinated), she’s understandably anxious about spending time anywhere other than her own apartment.

Meanwhile, I saw a news item this weekend about the death from COVID-19 of Doug Ericksen, a right-wing nut job state senator from Washington who sponsored legislation to prohibit vaccine mandates. The official cause of death has been listed as irony.