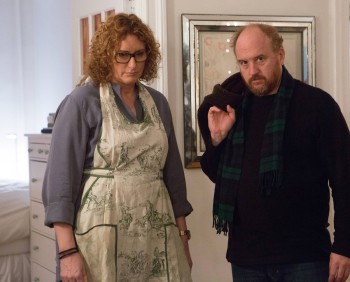 I just finished watching last week’s season premiere of “Louie,” which featured an appearance by Judy Gold as Marina, a woman who, ah, it’s not worth explaining the character in order to tell you this story.

About 20 years ago, I was doing mornings in Washington, DC, and had a deal with the big local comedy club to have their weekend headliners — who typically did one show Thursday night, two shows Friday night, and three shows Saturday night — come over to the studio on Friday mornings to have some fun and sell some tickets. I’d been doing this for years and had great experiences with comedy pros like Brian Regan, Jake Johannsen, Kathleen Madigan, and many others. They understood how to give great radio, even though getting up at those hours was completely against their nocturnal biorhythms.

Sometimes, I had people on I’d never heard of who turned out to be great guests, nonetheless (e.g. Jack Gallagher, Rob Becker). On occasion, the comedian would turn out to be a dud, so instead of having them hang around for an hour or more, I’d cut it short after 10-15 minutes and wish them well.

Then there was Judy Gold.

When she arrived at the station, my producer went to greet her and offer a cup of coffee or water or whatever, then had her sit in my office for a few minutes until I was ready to have her on the air. When the time came, I walked down the hall during a commercial break to say hello and escort her to the studio. It was immediately apparent that Gold was in a sour mood. She was complaining about how early it was and how she hated doing morning radio and how she didn’t want to be there.

Before we got to the threshold of the studio door, I put my arm out and stopped her, saying, “Look, it’s obvious you’re not into this, so let’s just forget about it. You can go.” She looked at me in shock, as if she’d never been spoken to that way before, then uttered a string of curse words before turning and heading for the front door, where the club’s driver was probably very surprised to see her so soon.

I went back in the studio and, when the commercials were over, proceeded to explain to my audience why the comedian whose appearance I’d been promoting was not going to join me on the air. I acknowledged that it was difficult for some performers who worked Thursday night to turn around and be ready to entertain Friday morning at 8am, but that unlike many of her predecessors on my show — who understood that talking to an audience of 30,000 people would help fill some of the seats in a 250-capacity comedy club — Gold wasn’t willing to make the effort, so I’d sent her away.

When I got to the next commercial break, my producer told me that the booker from the comedy club, who always listened to these segments and with whom I’d had a good relationship, was on the phone and wanted to talk to me off the air. When I picked up the line and said hello, she said four simple words: “I don’t blame you.” Apparently, Gold was a real piece of work in the club, too, which may explain why she was never invited back.

And probably why you’ve never heard of her.