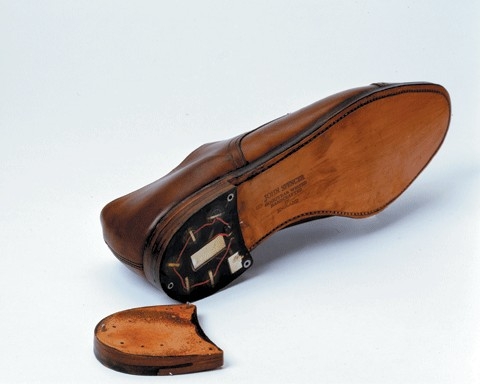 .” It’s an actual spy shoe with a hidden transmitter that the KGB used in the 1960s, which you’ll find on display at the International Spy Museum. Here’s the story of the spy-shoe, according to Alyssa Danigelis of Discovery:

Throughout the 1960s and 1970s, Western diplomats in Eastern Europe avoided buying suits there, preferring to mail order clothing and shoes from the West. In Romania, the secret service used this to their advantage, working with the postal service to install a transmitter in shoe heels. Boghardt says that the recording device was discovered during a routine room sweep that revealed a signal, but the signal disappeared when all the diplomats left the room.

Here are other gadgets in that exhibit.