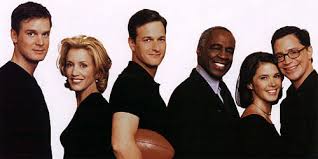 I’m an Aaron Sorkin fan. That doesn’t mean I love everything he does — although “The Newsroom” isn’t his best work, I still watch every episode, and even endured “Studio 60 On The Sunset Strip” — but I like the way the man uses the English language, and the prodigious amount of material he creates. He and David Mamet are probably the two best wordsmiths of the last couple of decades.

My appreciation of Sorkin began with a stage production of “A Few Good Men,” then the movie “The American President,” and then his first television series, “Sports Night,” which ran for two seasons on ABC beginning in 1998. I enjoyed everything about the show, so I devoured the oral history of the series that appears in the latest issue of Entertainment Weekly, with comments from all of the principals, including Sorkin and show star Peter Krause:

SORKIN: Tommy [Schlamme, the show’s director] and I aren’t the world’s most efficient producers; when other people are going home at 6 and 7, we’re still shooting at midnight and 1 a.m. And the second year of Sports Night was also the first year of The West Wing, so Tommy and I were doing both at the same time.

Imagine that. Sorkin not only had two network series on the air at the same time, but wrote every episode of both of them. Other showrunners have had simultaneous primetime projects (from Norman Lear in the 1970s to Chuck Lorre today), but even with a staff that contributes ideas and research, that’s an amazing amount of high-level writing.