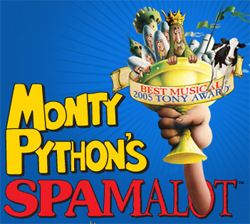 
As I explained this afternoon on my KTRS show, this seemed ludicrous. Having seen it performed on Broadway by David Hyde Pierce and Tim Curry, I can report that the song was funny and clever and bouncy and, most of all, not anti-Semitic. The original lyrics were only offensive to anyone who doesn’t know this is a Monty Python show, written by Eric Idle, full of satire and silliness. Moreover, the Jewish population of the St. Louis metro is only about 60,000, whereas there are more Jews in the New York area than in all of Israel. If there were going to be objections, they would have happened years ago, when “Spamalot” was winning Tony awards.

This evening, I received an e-mail from listener Rose Stockmann telling me that the Muny has received enough comments about the changes to that number that Mike Isaacson, the executive producer, has issued a statement:

There is a perception that we, The Muny, changed these lyrics because we felt the original would offend our audience, or we were afraid of it. To that I cry “NI!” The “star” version of the song is in the officially licensed version of the script that we were given to produce, and is being used in all worldwide productions of “Spamalot.”


I was involved with Broadway and touring shows of “Spamalot,” so I’m happy to share the history. In New York, the original version was an inside Manhattan joke that landed. But the writers found that in the subsequent productions and tours, it worked less well. When they created the London production of “Spamalot,”, they wrote this new version, and they felt it was very successful. If you want it hear it, it is on the London cast recording available on iTunes. It is titled “Star Song.”


For our Muny production, our director Denis Jones submitted some lyrics to change some of the British references in the “Star” version to Muny references. Mr. Idle approved them immediately. In the highest compliment to Denis, Mr. Idle told Denis at the opening night party that he wished that he (Eric) had done more for us, he was so happy with the results.

Isaacson goes on to say that often, by the time a show is available to The Muny, the official script reflects changes made after the Broadway original, as is the case with The Muny’s upcoming productions of “Shrek” and “South Pacific.”

To which I say, if the change wasn’t done purely for political correctness reasons, and Eric Idle has signed off on it, the case is closed. Now, about that swallow gripping a coconut by the husk…