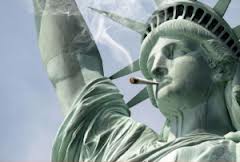 Missouri won’t be joining Colorado and Washington as a legal-marijuana state anytime soon. The state’s primary lobbying group, Show Me Cannabis, has decided not to pursue a referendum on this year’s ballot because it’s an off-year election, which means much lower turnout and much older demographics (it will take under-35 voters to swing the pendulum towards legalization).

Today, I talked with the group’s executive director, John Payne, about how soon he thinks recreational weed could be legalized, whether the state legislature might permit medical marijuana, and whether more jurisdictions will join St. Louis city and Columbia in decriminalizing pot possession. We also talked about the economics of legal marijuana in Colorado (where tax revenue will be 20% higher than original expectations), the shocking number of Missourians busted every year for drugs, and whether there will be any movement on the federal level soon.

For the record, I quit smoking weed over 35 years ago, but fully support legalizing, regulating, and taxing it. Frankly, I’m shocked that some businesses that would profit from more marijuana sales aren’t throwing their weight behind this effort. I’m talking about you, White Castle!