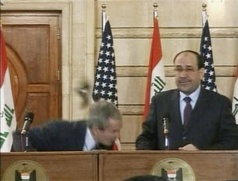 You gotta give President Bush credit for how he handled the shoe-throwing incident in Iraq last night. He showed quick reflexes in ducking (twice) and in keeping things calm.

I bet there was a meeting at the Secret Service today to find out why their response was so slow, considering that the reporter who threw the shoe had enough time to take his other shoe off and throw that, too!

I’m pretty sure that once he was tackled to the ground, the shoe-tosser screamed in Arabic to the security personnel, “Don’t tase me, Hassan!”

Several reports I heard this morning said, “In Iraqi culture, throwing shoes at someone is a sign of contempt.” As opposed to here in America, where it means, “We love you and want you to have our footwear!”

Supposedly, Iraqis consider the bottom of the foot to be the dirtiest place on the human body. I guess they’ve never had to change an infant’s diaper. Now that would be a sign of contempt — throwing a used Pampers at someone.

Although it does make me wonder about those women who threw their panties at Sting.