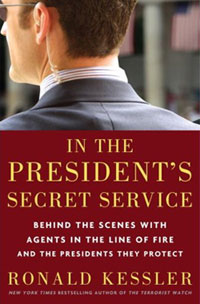 Ronald Kessler is stirring up some controversy with his book, “In The President’s Secret Service.”

When I talked to him on KIRO/Seattle, he claimed that the agency’s budget has been cut since being moved from Treasury to the Department of Homeland Security, and that cost-cutting is endangering the life of the President (and others they protect). This, at a time when the number of threats has risen from 3,000/year against President Bush to 12,000 against President Obama.

With the armed nutbags showing up recently outside an Obama speech, and the Southern Poverty Law Center’s report on the rise in militias in the US, this is not a time for lax security around the leader of the free world.

We also discussed how he got these agents to talk about the job (what part of secret do they not understand?), what they think of how they’ve been portrayed in movies like “In The Line of Fire,” and which protectees they did and didn’t get along with. In that regard, Kessler has some intimate stories about LBJ’s affairs, Carter’s fake luggage, the Bush twins trying to escape without security following them, and more.