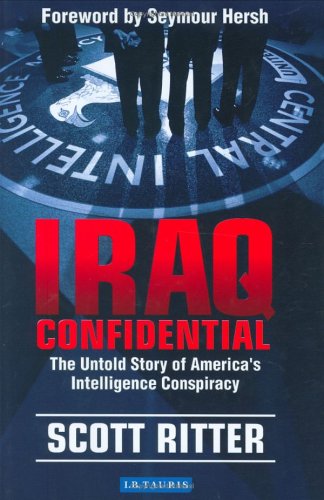 Here’s my conversation with Scott Ritter, the former weapons inspector in Iraq and outspoken critic of the war, about his book, “Iraq Confidential: The Untold Story of the Intelligence Conspiracy to Undermine the UN and Overthrow Saddam Hussein.”

We talked about his trip to Iraq in November, 2002, when he addressed Saddam’s top officials and convinced them to allow the inspectors back in by telling them if they didn’t, they’d be dead men when the US attacked. He also explained how the undermining of his efforts began in the Clinton administration and continued through the run-up to war under President Bush, including manipulation and suppression of information by the CIA, which operated under a completely different agenda. He also reveals the failed CIA attempt to orchestrate a coup in Iraq in 1996.

We both expressed our distaste for Ahmed Chalabi, the Iraqi who was was a trusted source, then fell out of favor, and is now one of the top men in the new government of Iraq. Like Ritter, I’ve always considered Chalabi one of the architects of the overthrow of Saddam, but for his own reasons, not ours.

Ritter tells it like it is, as he has many times on my show, despite tremendous pressure and administration attempts to discredit him. Listen, then click here to subscribe to these podcasts via iTunes!