Rule #1 Of My Fight Club 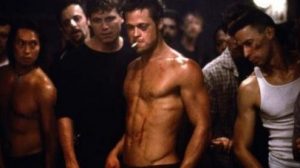 In light of Will Smith slapping and cursing at Chris Rock at the Oscars Sunday night — turning a punchline into a punch line — I was going to write a piece about why that never would have been me. Then I remembered that I already wrote it, in 2010. Here it is, with a couple of additions.

I remembered a phone call I got on the air several years ago. I don’t know how the subject came up, but I mentioned that I hadn’t been in a fist fight since I was eight years old — and at the time, it was less a brawl than me being beat up again by the neighborhood bully.

A few minutes later, a listener challenged what I’d said, saying he didn’t believe me, that it was impossible that I’d gone this long without being in a brawl. I could tell from his tone that he was the kind of guy who would easily get dragged into a fight, but I’m just not that kind of guy.

I’m more of a 100% poultry kind of guy. As an adult, I’ve never wanted to take a swing at anyone. It’s not that I had the desire but held myself back. I can honestly say, for over 50 years, nothing has motivated me to want to hit another person. More importantly, I’ve never wanted to be hit by someone.

I’m not going to fight you just because you bumped into me accidentally, or cut in line ahead of me, or called me a name. I’ve been cursed out by opponents I’ve beaten at the poker table, but remained silent and seated until they calmed down or a supervisor came over and talked to them. After 40 years in the radio business, there’s absolutely nothing you can say about me that I haven’t heard before — at least once.

Moreover, unlike my phone-friend, I don’t frequent places where incidents like this are likely to happen. I stopped drinking 27+ years ago, so I’m rarely in a bar. In fact, I’m unlikely to patronize any place where anyone gets particularly rowdy. I guess that now includes the stage of the Academy Awards.

Don’t get me wrong. I’ll defend my wife and daughter against any physical threats, and I’ll happily engage in any kind of verbal sparring you like, but once temperatures start to rise and there’s a risk things could turn physical, I’m done. You win. Congratulations. I’ll be leaving now. Fight cancelled.

For me, rule number one of fight club is no fighting.

By the way, The Academy is not going to revoke Will Smith‘s Oscar, just as they didn’t for Roman Polanski, Kevin Spacey, or the movies Harvey Weinstein produced. The shame is that being an asshole in public is no longer frowned upon by half the population of the US. In fact, it’s their agenda, learned by too many state legislators and current members of Congress who have followed their former Dear Leader into the scum gutter.