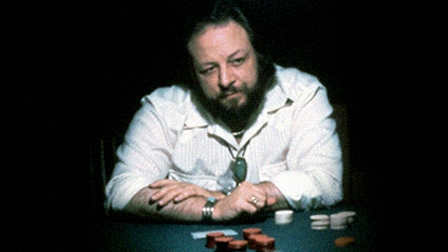 It’s silly to try to name the Greatest Magician Ever, even if you break it down into subcategories like Grand Illusionists, Escape Artists, Mentalists, Comedy Magicians, etc. Yes, there are competitions held each year at which magicians win prizes and honors, but comparing artists of any kind has always seemed pointless because personal taste comes into play, just as it does whenever you ask anyone who was the all-time greatest in music, acting, painting, or dancing. But if you were to make a list of the best-ever Sleight Of Hand or Card Magicians, the name of Ricky Jay — who died yesterday at 72 — would have to be near the top.

I first noticed Jay when he appeared on a Doug Henning special in 1976, displaying his card-throwing abilities.Sadly, I never got to see him in person, but over the next few decades, I read several of his books (most of which are now out of print and quite valuable) and was thrilled any time he’d pop up as a guest of Merv Griffin, Arsenio Hall, or David Letterman. In 1993, I devoured the essay Mark Singer wrote about Jay for The New Yorker.

While the performances of other prestidigitators can be enjoyed without a syllable being uttered, that was never the best way to view Ricky Jay, because his verbal dexterity was second only to his manual manipulation. While his hands were doing the seemingly impossible, his mouth accompanied them with wonderfully clever verbiage (who else used words like “simulacrum” and “pachydermatous”?).

Here’s what I wrote about Jay in 2013, when I added a documentary about him to my Movies You Might Not Know list:

Jay is one of just a few magicians whose work I have admired for many years. He is a master manipulator, both of cards and an audience, with patter so perfectly chosen that it’s only fitting that he be close friends with David Mamet, in whose movies he has appeared more than a half-dozen times (beginning with another title on my list, “House of Games”).

In addition to “Deceptive Practice,” (currently streaming on Amazon Prime) I recommend watching Jay at work in:

Beyond the Mamet movies — “Things Change,” “The Spanish Prisoner,” “State and Main,” and “Heist” (in which he was given the classic line, “My motherfucker is so cool, when he goes to bed, sheep count him“) — Jay had roles in “Boogie Nights,” “Magnolia,” and “Tomorrow Never Dies.”

In each of them, you can sense both the glee and irritation Jay brought to the characters, while seeming to reveal the core of his own personality. Here was a man who spent thousands of hours mastering his craft and studying its history, then dumbing it down so that we could understand it and be awed.