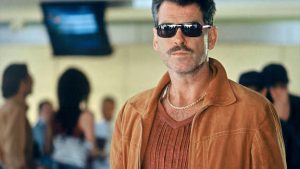 “The Matador” won’t be in general release until January, but it was the opening movie of the St. Louis Film Festival last night. I went to a screening earlier this week and was so impressed that I invited the director, Richard Shepard, onto my show yesterday afternoon.

The movie stars Pierce Brosnan as a professional hit man, but the character is as unlike James Bond as you can imagine. He’s good at what he does, but he’s vulgar and crass — and going through a midlife crisis in which he discovers that he has no friends except hookers and dirtballs. That’s when he meets Greg Kinnear’s character, a down on his luck businessman, in a Mexico City hotel bar, and wedges his way into a friendship with him. “The Matador” was enough of a success at Sundance to get the Weinsteins interested, and they’re now distributing the movie, which I think has a pretty good chance of being a hit.

Shepard and I talked about his love/hate relationship with hit man movies, how he got Pierce Brosnan to play the role (and do a scene where he walks through a hotel lobby in nothing but his underwear and boots), how he was in “movie jail” for a decade after his first movie was a complete bomb, how important the opening weekend will be, and lots more inside-Hollywood stuff.