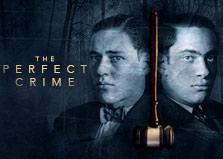 Seventy years before the OJ Simpson murder story, another matter was being referred to as The Trial Of The Century. That was the Leopold and Loeb case, in which two college students from wealthy families were charged with killing a teenage boy just for the thrill of it. What made the case a national sensation in 1924 was that the boys’ families hired attorney Clarence Darrow, who — in his efforts to avoid the death penalty for his clients — used a defense very similar to the “affluenza” rationalization of Ethan Couch, the rich Texas teen who in 2013 was given probation after killing four people while driving drunk.

The Leopold and Loeb case will be re-examined in the documentary “The Perfect Crime,” which will air as an episode of “American Experience” on PBS this Tuesday night (2/9/16). I spoke with director/producer Cathleen O’Connell about: