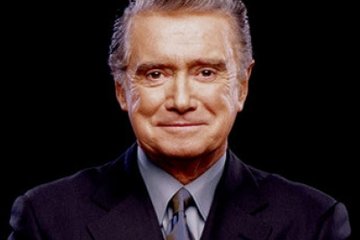 Happy birthday to an American broadcasting legend, Regis Philbin, who turned 80 today. I’ve written many times about my admiration for what Regis does every day on his show, his game show hosting skills, and his appearances on other people’s shows, too, but I don’t think I’ve ever shared this story.

I had the pleasure of having Regis as a guest several times during my run on the radio in Washington, DC, in the 1980s and 1990s, and he was always willing to play along with anything I threw at him. Sometimes, we had extended conversations, and sometimes he’d make a quick cameo appearance — like the time he helped out with The Harris Challenge, the trivia segment that was a mainstay of my show.

After a listener had scored enough points to win, I asked my sidekick, Dave, to tell him what he’d won. Dave said, “Paul, I don’t have that prize information.” I asked what happened to it. Dave replied, “I think I gave it to Regis.” So I punched the guest line on the studio phone and ask, “Regis, can you tell us what he’s won?” Regis, who’d been standing by silently, jumped right in and ran with it, telling our listener about his prize — and then staying on the line to joke around with us for a few minutes before rushing off to his studio to do his own live show.

Then there was this conversation we had when I was hosting an afternoon radio show in DC. It’s ironic that, at the time, he said he didn’t like sitting in the guest chair with David Letterman, because in the last decade he’s become a money-in-the-bank guest on “The Late Show,” creating some magical shows like this one. But here he is with me in 1997…

Harris: Regis Philbin was on with me many times when I had a morning show. Every few months he’d pop on and I’d help him promote stuff that he was doing on “Live With Regis and Kathie Lee.” Then, for some reason, Regis wasn’t on with me anymore. I think a publicist stepped in and got in between us, and he wasn’t on anymore. Now here I am in the afternoons and I start getting e-mail from a guy by the name of Dan Philbin. I get this mail regularly, as Dan and I write back and forth. Many listeners write in to me and I write back to them all the time. In one of my notes back to him, I said, “Philbin? By any chance, are you related to Regis Philbin?” He said, “Well, yeah, he’s my dad, but I don’t want to make a big deal out of that.” I said, “I don’t want to make a big deal out of it either, but we love your dad and we loved having him come on the show and it would be great if that could happen again.” Now, BOOM! Here is Regis Philbin! Hi, Reege!

Philbin: Hi Paul, how are you doing?

Harris: It’s great to have you back.

Harris: Somebody in the office, I think the person we were speaking to left the organization and some new person came in and she said, “Oh, no, I have to protect Regis against all radio guys.” Because you know how radio guys can be, Reege.

Harris: I’m happy to see that. I have to ask you about something I saw in the news today. That is that the Miss America pageant this year is going to be adding bikinis, but subtracting Regis.

Philbin: Yeah, darn it, just when they get bikinis, I have to leave.

Philbin: I’ll tell you what happened. I did it for, I think, four or five years with Kathie Lee, and then I did it alone last year. But we’ve had a change in the network. ABC is carrying the show this year, not NBC, and they wanted to go with a younger, hipper, funnier, better looking version of Regis, so they wound up with this husband and wife team from All My Children. I just interviewed the lady a couple of weeks ago. A very, very nice and good looking gal, Eva Larue Callohan, her husband’s name is John Callohan, and they got picked to do the Miss America pageant.

Harris: Reege, let me tell you something. No one’s tuning in for Eva and John. We were all tuning in to watch you and the ladies.

Philbin: Gosh, you know, you’d be surprised that those soap opera stars have a big following. I did it, I was there, it was a lot of fun, and frankly it was all a lot of work, and I’ve moved on to bigger and better things.

Harris: Yeah, but you’ll be watching for the bikinis, won’t you?

Philbin: Absolutely! I want to see what that’s all about.

Harris: What do you think of that move?

Philbin: You know, they had to do something. The Miss Universe pageant…

Harris: How is life with you? You’ve always got dinners and openings and screenings. What are you doing tonight?

Philbin: That crazy Letterman, he wanted me to be on his show tonight, and then this morning, or rather earlier this afternoon, they postponed the sketch for another night. He kind of tied up my night and that’s why I’m talking to you so early.

Harris: What was the sketch going to be? Can you tell us?

Philbin: It was going to take place in a restaurant and I was going to be a waiter. They haven’t scratched it all together. He changes things at the last minute, and it’ll come back up maybe in a couple of days or maybe next week.

Harris: You love doing that and it’s obvious that he loves having you on the show.

Philbin: It’s great fun, and he’s got that band driving there and there’s great electricity in the audience and everybody’s up. It’s fun to see him, only if it is for a minute or two. I don’t like to be interviewed by David, but I don’t mind going on his show and participating in whatever stunt he has available.

Harris: Why don’t you like to be interviewed by him?

Harris: Yeah, but Pauly is a moron!

Philbin: I know that Pauly has his own problems, but put the two of those together, and I’m telling you, it was like a snake pit.

Harris: I know that you’ve also had some tough times on your own show with the whole Kathie Lee and Frank thing, and I don’t want to press you too hard on that, but I do have to ask. Were there mornings where you said to yourself, after looking in the paper, “Oh, God, I’m not going in there today?”

Philbin: It was tough. The flack was really flying and the television tabloid shows were coming around. It wasn’t easy to get through that, and there were some mornings where I just hated it, but you just have to go on the air with it.

Harris: You two don’t talk before the show, but there must have been some mornings where she said, “Look, let’s not even talk about my life right now.”

Philbin: Listen, we know each other so well now — I think it’s been twelve years since we’ve been together — that I know what to bring up and she does too, and what not to bring up. Naturally, we weren’t going to talk about that situation on our show.

Harris: I’m a big fan of yours and when I think of the word broadcaster, there are few people who hit that definition better than you.

Harris: No, don’t change a thing.

Philbin: I’ve always thought that that was a special place and I wanted to keep it that way, which is why we really don’t talk at all before the show starts.

Harris: I saw the show this morning, and I saw you sitting in the audience, introducing some rock band that it was obvious neither of you had ever heard of nor cared about, and I’m thinking to myself, “Instead of this, give me five more minutes of Regis telling a story about the Italian restaurant he went to last night and the bathroom in the back without toilet paper!” That’s what we want from you, Reege!

Philbin: I know what you mean. But you know that we do sometimes go 25 minutes, and that’s more than half the show, counting the commercials. And Gelman has got his two or three guests that he’s got to get on, so he’s having a fit. Twenty-five minutes is really enough of us and then we’ve got to start moving on to other things. But you’re right, I’d never heard of that band before.

Harris: Reege, thanks very much for coming back on with me.

Philbin: All right, Paul, I appreciate it.

Harris: Is there a chance we’ll ever do this again?

Harris: Oh, good, because we’ve got to keep Dan happy.