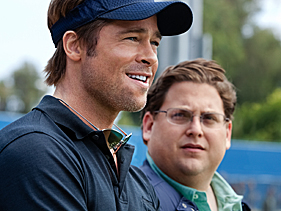 For the next several days, I’m going to share some recommendations for movies and books I’ve enjoyed recently, starting with two based-on-true stories, one of which is still in theaters and an older title that’s on DVD.

“Moneyball” is an inside-baseball movie by any definition, starring Brad Pitt as the general manager of the Oakland A’s circa 2001. He’s solid in the role, despite the fact that he’s eating in every scene. From sunflower seeds to Twinkies to sandwiches, the guy’s always munching on something. Maybe with all those kids at home, there’s never any food left for him, so he eats at work.

It’s the same character crutch Pitt used in “Ocean’s Eleven,” but thankfully the rest of his performance keeps the “Moneyball” plot humming, and Jonah Hill — as the numbers-cruncher who helped change the way baseball owners pick their players — gives a stand-out supporting performance. The dialogue is crisp, as you’d expect from Steve Zaillian (“Schindler’s List,” “A Civil Action,” “Searching For Bobby Fischer”) and Aaron Sorkin (every quote-worthy movie and TV show of the last 15 years).

Biggest complaint: not enough Robin Wright — why cast her if she’s only going to be onscreen for 3 minutes? Other than that, “Moneyball” is worth your money.

“Gideon’s Trumpet” was a 1980 Hallmark Hall Of Fame production that I found on DVD, and I’m glad I did.

It’s the true story of Clarence Gideon, a man accused of breaking into a bar/poolroom to steal wine and money. Gideon had no way to pay for a defense lawyer, and the court refused to appoint one for him because Florida only required it in capital offense cases. Gideon offered little in his own defense, which made it easy to convict him based on the testimony of a single eyewitness.

From jail, Gideon appealed his case all the way to the US Supreme Court, which agreed to hear his case and appointed Abe Fortas to represent him. They reversed the lower court’s decision, setting a landmark precedent which stands to this day, requiring that every criminal defendant have at least the services of a court-appointed attorney.

What’s fascinating about the TV production is that it used virtually no music to accent the drama, letting the characters’ words set the tone — a marked contrast to anything else you’d see on TV or in a movie now. And how about this for a cast: Henry Fonda as Gideon, John Houseman as the Chief Justice, Jose Ferrer as Fortas, Lane Smith as a defense attorney, Dolph Sweet as a helpful inmate, and Fay Wray (!) in her final role at age 73 as the woman who runs the boarding house Gideon lives in.