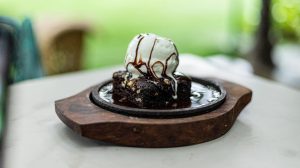 One of my wife’s pet peeves is restaurants that have desserts like a fudge brownie topped with ice cream, but the only flavor they have is vanilla. She’s a certified chocoholic and, no matter how many places we go, they never have have an ice cream flavor that satisfies her. I assume the only way this is possible is that the vanilla ice cream sales lobby is incredibly persuasive, convincing these eateries that chocolate on top of chocolate is a crime against dessert chefs everywhere. Personally, I’m not a vanilla hater, so I happily grab a spoon and finish off what she’s left behind.

Of course members of Congress should be banned from owning and trading stocks when it’s easy for them to profit from laws that directly affect the companies in which they hold shares. To use a sports analogy, the status quo is worse than Pete Rose betting on baseball. It would be like allowing him to bet on baseball after he changes the rules in the middle of the game. Shame on Nancy Pelosi for not seeing the inherent conflict of interest.

Frontier and Spirit are going to merge, thus creating the 5th-largest airline in the US — and consolidating all of the country’s most uncomfortable airplane seats under one company. These operators make the late lamented People’s Express look like a luxury airline in retrospect.

I enjoy playing Wordle every day, but I never post my results to Twitter for the same reason I don’t share how long it took me to do a crossword, how many hours of sleep I got last night, or today’s odd-number count of clean socks in my drawer.

And finally… I think I speak for all St. Louisans when I hope that Super Bowl Sunday doesn’t end up with Stan Kroenke — the obnoxious Rams owner who not only abandoned us, but lied about the region, too — holding up the Vince Lombardi Trophy.