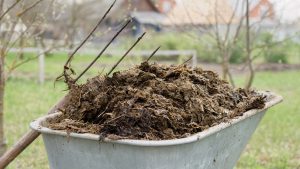 North Korea closed its border with China at the start of the pandemic, and that created an unforeseen problem. Kim Jong Un’s nation used to import manure from its neighbor, but without that influx, his country has a serious lack of fertilizer, which is a catastrophe for agriculture. So, North Korean authorities have beseeched their citizenry to poop more, a difficult task when you don’t get much to eat. But I have a solution. If Kim wants a large amount of foul, stink-filled, pure manure, let’s send him a year’s worth of Tucker Carlson shows.

Watching the 49ers-Rams game Sunday afternoon, it was impossible to avoid the voice of the stadium public address announcer, who not only had the volume cranked up to eleven, but was constantly shouting — even mundane things like “second down” (more like “SECOND DOWN!!!!!!!“). I understand that part of the PA person’s job is to keep the home crowd psyched up and noisy, because that can be a distracting annoyance for the visiting team. But this guy did it no matter who had the ball and no matter what the situation was. It was yet more proof that, COVID aside, the experience of watching an NFL game in person doesn’t come close to the pleasure of watching it at home, where no one’s yelling, there’s no line for the bathroom, and the only irritant is Troy Aikman’s lame analysis.

Speaking of the NFL, I wish sportscasters (mostly over 50) would stop referring to one of the franchises that plays in the Meadowlands as the New York Football Giants. That distinction was important when The Giants was the name of both football and baseball teams in New York. But the baseball team left for San Francisco in 1958 — that’s 63 years ago! No one refers to the St. Louis Baseball Cardinals, despite this city’s NFL team moving to Arizona in 1988.

If you’re wondering why I haven’t had anything to say here about Betty White, Sidney Poitier, Peter Bogdanovich, Bob Saget, or other recently deceased celebrities, it’s because I never met or interviewed any of them. If I did, I’d re-post that audio or share a story. I don’t even have anything different or original to add to all the other commentary that’s been published in the last couple of weeks about their admirable bodies of work.

And finally… The next time I meet someone who works on the railroad, I’m going to ask them if Dinah is still in the kitchen, and whether there’s anyone in there with her.