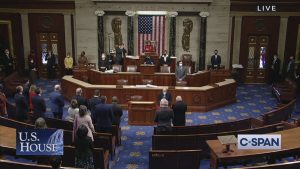 At the moment of silence today for the Capitol Police officers who died on January 6th, 2021, only two Republicans showed up. One was Congresswoman Liz Cheney, who has effectively been exiled by the party. The other was her father, former Vice President Dick Cheney, whose title as Most Evil Politician Ever was usurped many times over by Trump and his acolytes. None of the other GOPers bothered — but I bet during the last few years, those hypocrites were the ones hanging Blue Lives Matter banners.

Meanwhile, I enjoyed watching the speech our current president made today. It’s always fun seeing him switch to Pissed Off Biden mode. Not once did he mention Trump’s name, referring to him only as “the former president” or “the defeated president.” I’m pretty sure I saw him smirk a little bit while saying the latter.

I never had the chance to interview Peter Bogdanovich, but I wish I had. In fact, forget the interview, I would have liked to just sit and talk to him over lunch for 90 minutes. His “Paper Moon” and “What’s Up, Doc?” are classics I was happy to share with my daughter, his acting roles on TV (including “The Sopranos” and “Get Shorty”) were always fun, and I’ve gotten a kick out of watching many of the Peter Bogdanovich Recommends videos he archived on YouTube.

Claire McNear continues to come up with must-read articles about “Jeopardy!” Her latest is about how this season has been dominated by super-champions like Matt Amodio and Amy Schneider.

I just saw a concert announcement for three classic rock acts appearing on the same bill. One of them is Head East, who I assume will open the show by playing a 25-minute version of their only hit, “Never Been Any Reason,” and then say good night.