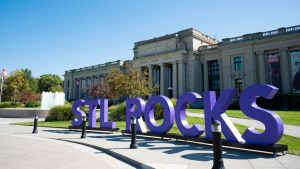 I normally publish my Best and Worst Movies Of The Year lists during the week between Christmas and New Year’s, but because there have been so many new releases in the final days of 2021, you’ll have to wait until Monday to read my rankings.

Highly Recommended: the Missouri History Museum has a great exhibit, “St. Louis Sound,” that traces the history of music made here — from Scott Joplin’s ragtime to Miles Davis’ jazz to Chuck Berry’s early rock and roll to Nelly’s rap. Among the other names you might know: Tina Turner, Johnnie Johnson, Fontella Bass, Albert King, The 5th Dimension, and John Hartford. When we went the other day, I was glad to see the curators made a point of including stories of the discrimination many Black artists faced while trying to earn a living writing and playing music in this area. The exhibit, which will run through 1/22/22, also includes timelines of some of the city’s radio stations, disc jockeys, and nightclubs over the last century. Admission is free.

Sarah Weddington, who successfully argued Roe v. Wade at the Supreme Court in 1971, has died at 76. Sad as that may be, at least she won’t be alive to see the current Supreme Court and right-wing state legislatures dismantle everything she fought for.

I miss the days of flicking around on a cable remote among the few available channels until happily coming across Dana Hersey hosting The Movie Loft on WSBK/Boston in that magnificent deep voice.

With 3-pointers seemingly so easy for today’s NBA players, how long before the league introduces a 4-point line (which the Harlem Globetrotters have had since 2016)?