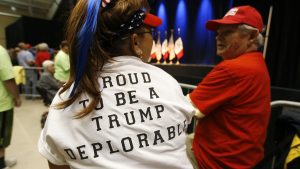 Every time I read an article about some GOP extremist or white supremacist or anti-vaxxer or ivermectin promoter or climate change denier or vote fraud claimer — all circles that overlap nearly 100% in a Venn diagram — I remember the backlash Hillary Clinton got in 2016 when she referred to many Trump supporters as “deplorables.” Then I think how right she was and how much more apt the label is today.

While we were in Alaska a couple of weeks ago, I learned that Juneau is the only state capital you can’t drive to. Like the vast majority of the state, no roads lead there, so it’s only accessible by boat or plane. That’s why I laughed at a Republican named Lora Reinbold complaining that Alaska Airlines was keeping her from doing her job as a state senator by not letting her on its flights to Juneau. Why? Because she’s been banned since refusing to wear a mask on one of its planes in April. That wasn’t an isolated incident for Reinbold, who’s spewed lots of anti-mask and anti-vaccine nonsense. Now she has to decide which method she’ll use to get to the legislature: Row or Wade.

Speaking of pandemic-related stories, a new study says those plastic barriers installed everywhere to separate customers from employees to reduce the spread of COVID aren’t very effective. Instead of blocking particles, the barriers impede ventilation, which is necessary to mitigate the spread of coronavirus indoors. What it doesn’t say is that the major reason the barriers are ineffective is that most of us talk around them, moving to the side where the opening is so we can be heard, thus defeating the plastic’s purpose completely.

The other day I was on a shuttle bus, wearing a mask just like everyone else on board. Then two unmasked people got on and sat down, looking at the rest of us as if we were the crazy ones. The next night, two friends and I went to a concert (George Thorogood), where the three of us were in the 1% of attendees with facial coverings. Now I was the one in the tiny minority wondering, “What’s wrong with these people?”