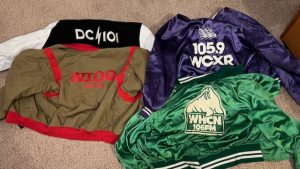 I recently cleaned out a closet in our basement and found a bunch of jackets from radio stations I worked for in the 1980s and 1990s. I had long ago gotten rid of all the t-shirts with call letters on them (even those from the 21st century), but I’d forgotten about this pile of radio garb.

Since I hadn’t worn any of them in more than two decades, my plan was to donate all the jackets to Goodwill, but my daughter jumped up and said she wanted some of them. So, we went through them and she chose four to keep. As she browsed, I remembered the irony of one of the worst places I was on the air having the most comfortable jacket. Too bad management there made the rest of my life so uncomfortable I couldn’t wait to get out of town.

The other thought that crossed my mind was, “Did we really think satin jackets were cool in the eighties?”

I remember an evening, circa 1984, when I was asked to introduce comedian David Brenner at Bushnell Auditorium in Hartford. I wore my WHCN green satin jacket, as I did for all my public appearances, from movie premieres to softball games to bar crawls. In fact, in just the prior months at the Bushnell, I’d had on that same vivid outerwear while emceeing comedy shows for Steve Landesberg (who had been part of the ensemble on ABC’s “Barney Miller”) and Gallagher (before he became a wack-job, when his only enemy was a watermelon — I wrote about my previous experiences with him here).

On the night of the Brenner show, I parted the curtains, walked out thinking I looked pretty damned good, and got a nice hand from the audience. Knowing Brenner would do a nearly two-hour show with no opening act, I purposely kept my remarks brief and brought him out. He strolled from the wings to center stage, wearing a beautiful, perfectly-fitted, black tuxedo.

I’d seen him backstage just fifteen minutes earlier, and we’d had a nice conversation in his dressing room, where he was wearing a polo shirt and jeans. Apparently, after I left him alone, he’d switched into his work clothes.

He looked dazzling. I felt like a little kid with a clip-on tie. The contrast in style was so obvious that, the next day, WHCN Program Director Dan Hayden told me to mothball the green satin from then on.