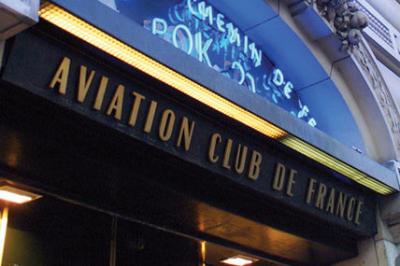 Nine years ago, I went to Paris for vacation with my wife, daughter, and mother. While there, we took in all the sights together, and since my mother is fluent in French, we had our own translator everywhere we went.

But one evening, I got away by myself to play poker. I had never played outside the US at that point but, armed with my passport, a pair of real shoes (no sneakers allowed) and a sport jacket — all of which I’d learned were required — I went to the famed Aviation Club de France on the Champs Elysee.

The entrance looked like any other store front on the grand boulevard. Inside, the place looked classy, with wood paneling throughout. It was only open in the late afternoon and nighttime, but when I arrived around 9pm, it wasn’t very busy. As a foreigner, I had to fill out some forms at the front desk, which enabled me to enter the club without paying the annual membership fee of €150, and was then escorted upstairs to the poker room, where only a few games were in progress (this was a weeknight in summer, a notoriously slow time).

I quickly noticed one difference between the tables here and at home — they didn’t have a tray full of chips in front of the dealer. To buy into the game, you got your chips at the cashier window. As for the rake, just as in higher-limit games in the US, there was nothing taken out of each pot for the club. Instead, players paid a fee to essentially rent a seat. When a new dealer sat down every half-hour, they collected the time rake from each player, then a floor person picked them up from each table. Thus, no chip tray.

I was seated in an eight-handed €5/5 pot-limit game, where the time rake was a ridiculous €15/half-hour (at that level, American poker rooms charge $6-9/half-hour). I had assumed the game would be Texas hold’em or Omaha, but didn’t know until I sat down that they were playing Dealer’s Choice.

Before each hand, the player with the dealer button could choose which game would be dealt — much like in lots of home games I’d played in over the years. There were twelve to choose from, on both sides of six plaques that were moved around the table in place of the dealer button. The choices included a couple of versions of Texas hold’em (including one with two full boards), a couple of versions of 7-card stud, and several variants of Omaha, including one I’d never heard of before named courchevel.

In courchevel, each player is dealt five cards (like in Big O, a game that has become more popular in the US in the last few years), but in courchevel, before any betting begins, the first card of the flop is exposed. This gives players a little bit more information on which to decide whether or not to play, and tends to entice more of them to get involved. Once that round is complete, the rest of the flop is revealed, and betting continues as it does in hold’em or Omaha through the turn and river, with players using two of their hole cards and three of the community board cards to make the best possible five-card hand.

Since all of the other players at this table were French, they thought they’d have an edge on me (the American interloper) by always choosing to play courchevel. They were right, but since I knew how to play Omaha, it didn’t take me long to sit, watch, and figure out the small differences in strategy. There was plenty of action and I was able to hold my own in their game, but they got upset when the dealer button got to me. Because I knew that most European poker rooms only spread Omaha and hold’em, I always chose seven-card stud, the game I’d grown up playing. They’d grumble and mutter things to me in French, but no one got up when the dealer’s choice was mine.

After a couple of rounds, things got a lot friendlier and some of them engaged me in conversation in English, which I appreciated, but I was still uncomfortable because of the atmosphere. All of the French players smoked non-stop at the table, causing a haze to hang in the room. At the time, most US poker rooms had started moving towards no-smoking policies, but in the years before that, I used to bring a little 5-inch fan to the table to keep the cigarette smoke away from my face. I hadn’t brought it to Paris, so the stench was getting to me (the Aviation Club has become smoke-free since).

Making it worse, however, was the sweat. This was the end of June, Paris was having a heat wave, and the Aviation Club was not air-conditioned. I don’t know what it is about Europeans not enjoying cold things — good luck getting ice in your soda in a restaurant — but the club didn’t even have a fan blowing. So they kept the windows of the poker room open (yes, windows in a poker room, and they opened!), but that just allowed the heat to pour in, along with the noise of the Champs Elysses below.

With the combination of the smoke, the heat, the odor of my deodorant-eschewing table-mates, the exorbitant time rake, and a game I wasn’t enjoying or profiting from, I didn’t even play a couple of hours before bidding them au revoir and bonne chance. The other players said good night — and laughed when one of them told me to come back sometime when I didn’t want to play stud.