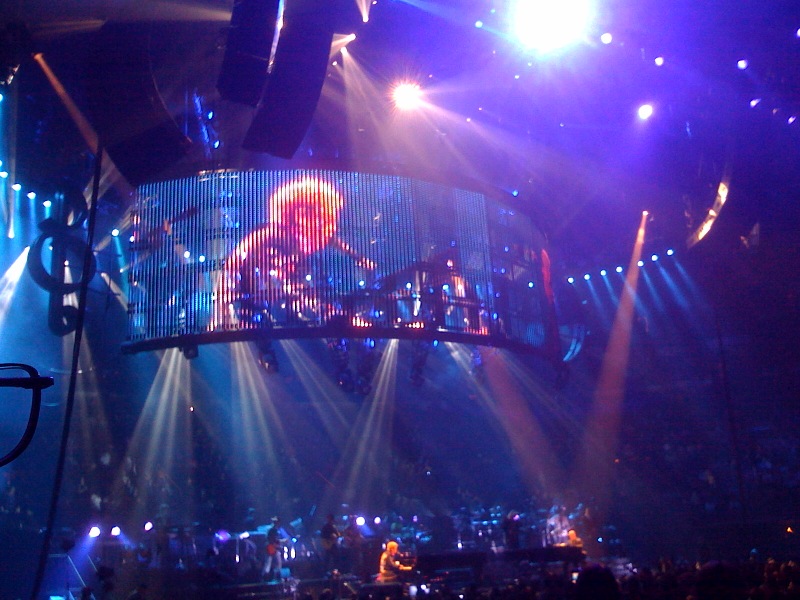 It’s easy to forget what a good piano player Elton John is. Through the decades of well-crafted hits and flamboyant showmanship, he’s become a pop icon, not someone known for his skill at the keyboard. But last night, he gave a master class in rock and roll piano.

It was the St. Louis stop for this year’s Elton John/Billy Joel Face To Face Tour. I’ve seen Billy over a dozen times, so I knew what to expect from him. But I haven’t seen Elton in concert for over 20 years, and thought I’d have to sit through a lot of those treacly tunes from the 80s and 90s like “Sad Songs Say So Much” and “Can You Feel The Love Tonight.”

Instead, Elton reached back into his classic rock catalog from the 1970s. In the early part of that decade, Elton had an interesting dual appeal on radio. While Top 40 stations were gobbling up “Rocket Man,” “Honky Cat,” “Crocodile Rock,” and “Daniel,” Album Oriented Radio stations (which is where I started my career) were going deeper into his albums to find songs that had a different mood and sound. It was those songs he pulled out last night — “Burn Down The Mission,” “Madman Across The Water,” “Levon,” and “Tiny Dancer” — that shocked me.

Looking around the arena during those songs, I could see a lot of fans with disappointed looks on their faces (and streaming up the steps towards the bathrooms and concessions stands), because they came to see Elton The Pop Icon, the guy who recently ended a long run at Caesar’s Palace, where I guarantee he played Nothing But The Hits. Instead, they got Elton The Incredibly Talented Musician/Composer. Those AOR classics allowed him to stretch and do extended improvisations on the piano, and that’s when he really impressed me. This guy can play.

Later on, once Billy had done his half of the show, the two performed together with both of their bands onstage (something like 14 people, including Davey Johnstone, an original member of Elton’s band, on guitar) and reverted to the songs the whole crowd could sing along with. But for a large portion of Elton’s half of the evening, he transported me to a different era of originality and experimentation.