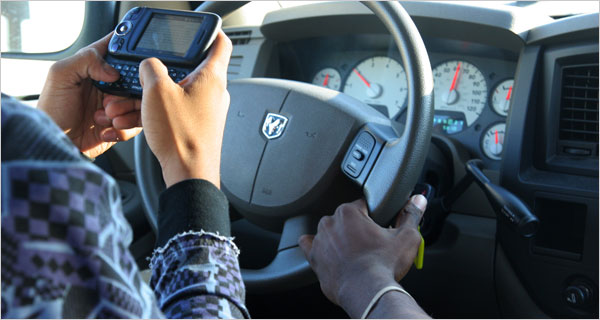 This was the front page photo in the Sunday New York Times for a story called “Driven To Distraction,” about the dangers of talking and/or texting on a cell phone while behind the wheel.

Under the photo, credited to Dan Gill, was this caption: “At 60 miles an hour on a Missouri highway, a 16-year-old driver texts with a friend as a 17-year-old takes the wheel.”

There are ethical questions here, which I haven’t seen or heard raised anywhere. If Gill was in the backseat, did he ask the teenagers to enact this scene so he could get the picture? Isn’t that a little William-Hurt-in-Broadcast-News-ish? If he didn’t ask them, and texting while driving is so dangerous, did Gill object when the driver took his hands off the wheel at 60mph? How did he end up in the backseat of a car with two teenagers up front in the first place?

I’d like to hear what the Times’ ombudsman, Clark Hoyt, has to say on the subject.

Update 7/20/09 6:11am: Not long after I posted this item, Dan Gill responded in the comments section with a link to a story on Photo District News that says, in part:

Last year, Gill was assigned a story for the Times that involved shadowing a group of high school students. This photograph is from that body of work, but it was not published until now. The scene was not set up. Gill writes:

“In the course of doing the story in which I was hanging out with or shadowing three high school students I made the picture.

“I met them at their high school after classes and spent the evening with them. I told them I would be with them but to forget I was there. It did not take them long for them to forget I was there. We rode from school to one of their houses and down an inter belt highway. The driver was constantly texting ‘his girls’ throughout our travels. At one point on the eight-lane inter belt either the driver suggested his friend hold the wheel or his friend suggested it…and they did it.

“Were we safe? Probably not…. As journalists, we are not here to judge or to direct, but only to observe and tell the story.”

Gill adds that the parents of the students knew he was with them. He and the Times have not identified the students in the picture.

Gill says he thinks this practice was common for them. “Would the kids be texting if I were not there? Yes,” he says. As for whether he should have told them to stop rather than taking a photograph, he says, “It’s not really up to the photographer to be the parent.”

No, you don’t have to be the parent — but you are the adult in the back seat of the car whose life is being endangered, and you might want to tell the driver, “Put your freakin’ hands on the wheel!!!”