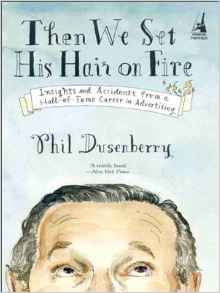 Legendary advertising executive Phil Dusenberry was on my show today to talk about his book, “Then We Set His Hair on Fire: Insights and Accidents from a Hall of Fame Career in Advertising.”  The title refers to the Pepsi commercial shoot where Michael Jackson’s hair went up in flames — but there’s a better story about what happened backstage just moments before that accident, involving Jackson’s $10,000 jeweled glove and the men’s room.

We also discussed whether he would have fired Kate Moss for admitting she uses cocaine, why some Super Bowl commercials are worth the expense and others aren’t, why so much advertising is targeted towards younger demographics when it’s older Americans who have more money to spend, why Pepsi may have better commercials but it’s still #2 behind Coke, how much of a role research plays in an advertising campaign, and about the commercial he produced to promote New York City after the 9/11 attacks.