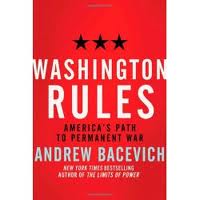 Andrew Bacevich, a retired US Army Colonel whose son also served and died in Iraq, knows a lot about US military policy — and thinks it’s time for a change. He joined me on KTRS/St. Louis to talk about his book, “Washington Rules: America’s Path to Permanent War.”

Bacevich challenges the strategy that hasn’t changed much in five decades, regardless of who is commander-in-chief, which continues under President Obama just as it did under President Bush. We discussed how prescient Dwight Eisenhower’s warning about a “military industrial complex” was, and why the US having a permanent armed presence around the world has become both unaffordable and increasingly dangerous.