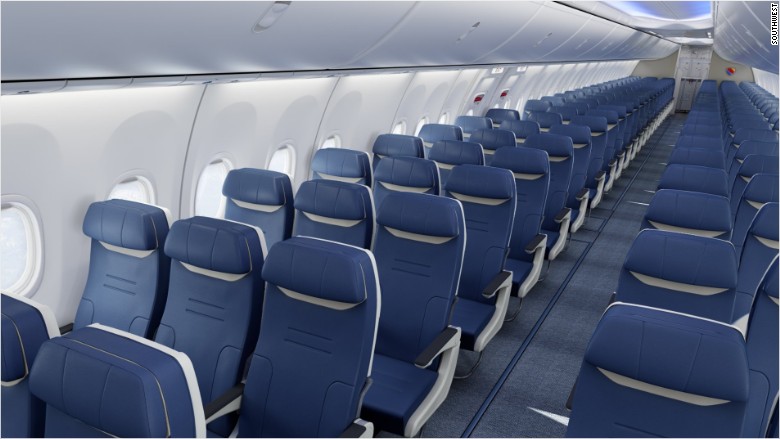 Southwest Airlines, which I fly regularly, has made two announcements recently — one that I cheer and one that I boo.

Cheer: by summer 2016, Southwest says the seats on its Boeing 737-800 will be a little bit wider. How much is a “little bit”? About seven-tenths of an inch. That’s not much, but as a large human, I can tell you it’s better than the hip-squishing seats on other airlines, all of which are smaller. Now if they’d give me another inch of legroom so my knees aren’t wedged under the tray table in its unlocked, horizontal position, we’d be moving in the right direction.

Boo: As part of a new program it’s rolling out, Southwest recently allowed an author to turn one of its flights into his own personal book club, using the public address system to describe his latest effort and reading a chapter from it. They’ve also allowed fashion shows to take over the aisle and had bands (e.g. Imagine Dragons) play onboard. All of these are horrible ideas, created by some marketing genius who saw the potential for revenue from companies that want to reach a captive audience. That’s what we are at 35,000 feet — we can’t exactly opt out by leaving.

Since most of us like to close our eyes and get some sleep for at least a portion of the flight, who wants our solitude interrupted by anyone? Hey, even the flight attendants know not to bother someone with their eyes closed and head sagging to one side! And when I’m awake, I can entertain myself for a few hours with the audio on my phone or the video on my iPad or just enjoying the quiet hum of the plane.

I bet if you took a vote and left it up to the passengers, the majority would reject the idea of having pay-for-plane entertainment onboard. I can’t even stand it when the person in the seat next to me wants to have a conversation longer than 60 seconds, let alone lecture me on some topic they spent two years researching and writing about. And I’ve sat next to plenty of people who should not, under any circumstances, have access to the PA microphone.

If Southwest wants to conduct book clubs in the air, fine. Promote certain flights with certain authors and let the seats fill up exclusively with people who want to read their book and hear from them. But don’t spring it on us as a surprise — we already put up with enough nonsense when we fly.