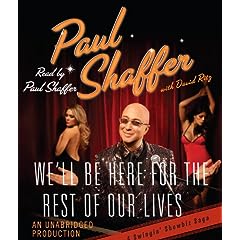 I’ve just finished listening to Paul Shaffer’s autobiography, “We’ll Be Here For The Rest Of Our Lives.” I got the audiobook version because I knew it would be better to hear the story told in Shaffer’s own voice — including his impressions of Don Kirshner, Cher, and even David Letterman — and I was going to be in the car for quite awhile on a round-trip to Chicago. Listening to Shaffer made the time go by very nicely.

Shaffer has had a helluva career. Before the Letterman shows, he spent several years with the original cast on “Saturday Night Live.” He and his colleagues have been the house band for the Rock & Roll Hall Of Fame induction ceremonies for the last quarter-century. He’s had a failed sitcom, a hit song, been a sideman on countless albums, done a memorable cameo in “This Is Spinal Tap,” and claims to have been Jerry Seinfeld’s original choice to play George Costanza on “Seinfeld.”

It’s apparent that his love of show business has never faded. In the book, Shaffer discusses his obsession with the Jerry Lewis telethon, the painful experience of roasting Chevy Chase, and how his mishandling of a pair of scissors might be responsible for Mel Gibson’s anti-semitism.

He also goes into detail about the rift that formed when he was forced to choose between being a member of the Blues Brothers band or working on Gilda Radner’s album. In the end, he chose Radner, who he had known since they worked together on a 1972 production of “Godspell” in Toronto (that also included Martin Short and Eugene Levy). That decision alienated Belushi, who banned Shaffer from the Blues Brothers movie.

In the chapters on his years as bandleader for Letterman, Shaffer explains how he comes up with the clever play-on songs for guests by getting together with the band a couple of hours before the show and taking suggestions from everyone. The one that makes them all laugh is the one we hear that night.