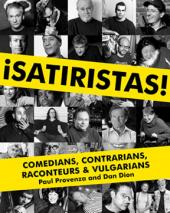 Paul Provenza has been a standup comedian and student of comedy for some three decades. He directed “The Aristocrats

” and is hosting Showtime’s “The Green Room,” in which he talks about the business with fellow comics.

He has also compiled “Satiristas: Comedians, Contrarians, Raconteurs, and Vulgarians

,” a collection of discussions he had with Robin Williams, Lewis Black, Don Novello, Colin Quinn, Lily Tomlin, PJ O’Rourke, Dave Attell, Richard Lewis, Robert Klein, Bill Maher, Patton Oswalt, Craig Ferguson, and a couple dozen other practitioners of the craft — including George Carlin, about a week before his death.

Today on KTRS/St. Louis, Provenza and I discussed the book, beginning with why so many in the comedy community hold Stephen Colbert in such high regard, and why what he does on his Comedy Central show is so different and difficult. We also touched on: