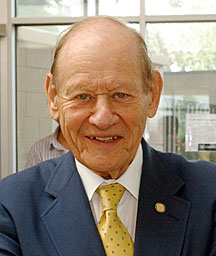 One of the world’s great skeptics and humanists, Paul Kurtz, died last weekend at 86.

Kurtz was a founder of CSICOP (the Committee for Scientific Investigation of Claims Of the Paranormal, which in the last few years has morphed into the Center For Inquiry), publisher of Skeptical Inquirer magazine, and started the independent publishing house Prometheus Books. He also was one of our most prominent secular humanists, publishing the magazine Free Inquiry and creating the Council for Secular Humanism.

Kurtz’s philosophy regarding non-religion and humanism, laid out in his many books, form the basis of today’s “new atheist” movement.

His work fighting paranormal claims and similar nonsense are on the same plane as that of James Randi, with whom Kurtz had a long, sometimes tempestuous, professional relationship. With a few others like Martin Gardner and Isaac Asimov, they are the beacons of the skeptical movement, never retreating from the idea that reason and critical thinking are paramount in a still-developing society.