A Pain In The Head 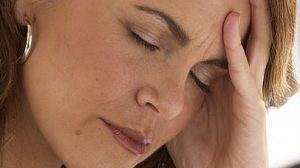 About 19 years ago, I started getting blinding headaches. They came upon me suddenly, and got so intense in the right front quadrant of my head that I couldn’t see out of that eye. Naturally, this scared the crap out of me, so I went to see my physician. He listened to my explanation of the symptoms, checked me out, and concluded that I was either suffering from migraines or cluster headaches.

Then he added: “But I’d like you to have an MRI, just so we can rule out a brain tumor.”

BRAIN TUMOR? I suggested to him that, in the future, he should avoid saying those two words to a patient until they were in a confirmed diagnosis — if he’d substitute “anything else” for “brain tumor,” the sentence above would cause a lot less anxiety. Upon hearing brain tumor, all I could think about was a malignant growth inside my head expanding faster than the Andromeda Strain.

I went for the MRI, but because I’m claustrophobic, I was freaked out even more, to the point where I couldn’t stay in the tube long enough for the tech to get the images of whatever was going on in my skull. He suggested I go to a place that had an “open MRI” machine which, although not as precise as the regular MRI, wouldn’t make me feel like I was stuck inside a coffin being nailed shut. He was right. The open MRI experience was much easier, and the radiologist on duty was kind enough to review the film immediately and contact my doctor, who then called me with the good news: no brain tumor.

Relieved, I asked him what was next. Reverting to his original diagnosis, he sent me off to a neurologist. That’s where I learned three things that would help fight these incapacitating headaches: taking medication (Imitrex); lying down in a quiet, dark room with no visual or audio stimulation until the pain subsided; and not eating pickled herring.

PICKLED HERRING? Yes. It was on a list the neurologist provided of foods which can be triggers for migraines and should thus be avoided. Also on the list: pizza, nuts, yogurt, caffeine, aged cheese, and several others. Not only was pickled herring on the list — it was at the top!

I asked the neurologist if most of his clients were old Jews in Boca Raton. If not, how did pickled herring make the number one spot? He explained that it was the combination of the fish and the vinegar that made it a migraine trigger. I told him that giving up some of the other items would mean a change to my diet, but cutting down on pickled herring from my current quantity of “never tasted it, never want to” wouldn’t be too much of a sacrifice.

He instructed me that not all migraine sufferers have the same triggers, so these were general (and clearly not alphabetized) guidelines, and I should use trial and error to discover which foods I should avoid. I stopped eating everything on the list immediately, and the migraines decreased substantially. Over the next few weeks, I tried consuming some of the foods again, and eventually narrowed down my own triggers — a process that has been remarkably effective at reducing my headaches from frequent to rare. In fact, I haven’t had one for more than a decade.

Now I can function like a regular person and go out for pizza and a Pepsi without having to lie down for an hour afterwards because I’ve gone blind in one eye.

But I still haven’t developed a yen for pickled herring.