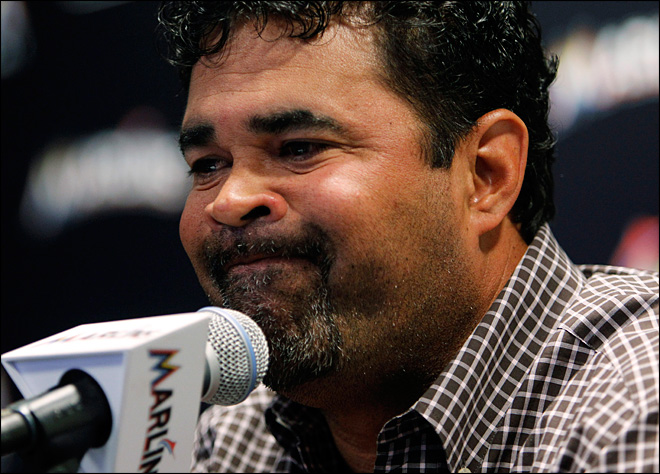 Miami Marlins manager Ozzie Guillen had to apologize yesterday after complaints regarding an interview he did with Time magazine, in which he was asked for his thoughts on Fidel Castro:

I respect Fidel Castro. You know why? A
lot of people have wanted to kill Fidel Castro for the last 60 years,
but that son of a bitch is still there.

Everything in that last sentence is correct, but it’s a single word in his first sentence that got him into trouble: “respect.”  In his press conference, Guillen (who was born in Venezuela) explained that he originally spoke of Castro in Spanish and “the translation to English was a bit confusing,” but he still apologized and admitted he’d made a mistake and should not have commented on anything outside of baseball.

I don’t know what Spanish word Guillen used that was translated as “respect,” but I don’t think he meant it sarcastically — like those times you’re arguing with someone and they say something completely dumb and you say, “Look, I respect your opinion, but you’re wrong about this.”  You don’t really respect them or their opinion, but you’re trying to soften it (as you do when you add “no offense intended” after saying something you know is offensive).

There was no reason for the Time reporter to ask a Major League Baseball manager about Fidel Castro in the first place, except to solicit a response that would create controversy.  Which brings us to the most important point, regarding power and politics.

The “firestorm” over Guillen’s comments can be traced directly to Little Havana, the Miami neighborhood that’s full of Cuban ex-patriots. I think there are only about 11 original guys who floated to the US on a raft in 1962 and are still alive, but they and their offspring have grown into a powerful special interest group.  They still hate Castro so much that you can’t even say his name without their radar picking it up, followed by ginned-up anger and controversy.

How much power to these ex-pats have?  They are singularly responsible for the US continuing to have a hands-off policy when it comes to Cuba.  You see, Little Havana controls the Spanish-speaking voters of Miami, which is in the electorally-impaired state of Florida, which just happens to be one of the key swing states in presidential politics.  No politician on the national stage would dare piss off the ex-pats by softening our Cuba policy for fear of losing Florida and its power-granting electorate.

I’m no fan of Castro or any other dictator, but foreign policy towards his regime (and now his brother Raul’s regime) is completely inconsistent with our attitude towards every other country.  Cuba is the only nation on earth that the US forbids its citizens to travel to* (except under certain special conditions, or to serve at the base at Guantanamo — in other words, there’s no general tourism from America to Cuba).  Meanwhile, citizens of other countries can (and do) travel to Cuba all the time to enjoy its beautiful beaches, because their governments aren’t afraid of blowback from Little Havana.

The US restriction on travel to Cuba is not because it’s a communist, totalitarian state.  If that was all it took to create a travel ban, you couldn’t go to Vietnam, a nation we fought a war with!  Not only are you allowed to travel to Ho Chi Minh City, but American companies do lots of business there.  The same is true for another tiny communist country you may have heard of.  Its name is China, and you could fly there tomorrow if you wanted to (and had a visa).  You could even go there, then come back and put on a one-man show full of lies about an iPad factory, and our government wouldn’t stop you.  American businesses do billions of dollars of business with China, but don’t you dare try to sell Pepsi and Pizza Hut in Cuba!

Why are you allowed to go halfway around the world to Vietnam and China, but not to Cuba?  For the same reason that the Marlins suspended Ozzie Guillen for five games — because of those ex-pats and their outsized political influence in Miami.  You may not know that Guillen made similar comments about Castro in an interview with Men’s Journal:

He’s a bullshit dictator and everybody’s against him, and he still
survives, has power. Still has a country behind him.  Everywhere he goes they roll out the red carpet. I don’t admire his philosophy. I admire him.

But that was in 2008, when he was managing the White Sox in Chicago, a city apparently outside the sphere of influence of the Cuban ex-pats.  Their power only reaches as far north as Washington, DC.

*No, you can’t go to North Korea, either, but that’s because of their restrictions, not ours.
Update 4/15/12 10:43am: Two nights after I posted this column, Bill Maher made essentially the same points in the New Rules segment of HBO’s “Real Time.”