Online Over-Reaction Is The New Normal 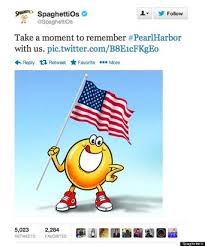 The Twitterverse went crazy last weekend after the above tweet went out from the SpaghettiOs account, with a picture of the pasta mascot and the words, “Take a moment to remember #PearlHarbor with us.”

For some reason, people were outraged that a canned pasta company would try to co-opt the anniversary of a national holiday to sell more product. Thousands of people re-tweeted it, replied with nasty comments, and so on, instead of doing what they should have done — ignored it. By late in the day, another tweet appeared from SpaghettiOs: “We apologize for our recent tweet in remembrance of Pearl Harbor Day. We meant to pay respect, not to offend.”

Ridiculous, but no longer surprising. We have reached a point in our world where hair-trigger rage has become the norm. We seem to have lost the capacity to see stupid things and simply move on with our lives. Thanks to Twitter, Facebook, and other social media — along with always-angry radio hosts — every American feels they must comment on everything they see, and even a completely non-offensive item like this engenders the craziest responses.

That’s one of the reasons why I stopped allowing comments on this site several years ago. At first, I allowed anyone to say anything, but that got out of hand almost instantly. Then, I moderated the comments, but that became both a burden and a headache because I still had to read some of the most obnoxious reactions you can imagine. Finally, I just turned off the comments option completely. I still have readers and listeners who offer opinions via e-mail, but even those that disagree with me have a different tone than the comments did. It’s probably because the writers have to attach their own names, as opposed to the anonymity of a quickly-posted hate-filled comments. In most cases, I reply to those e-mails and have had some constructive conversations with consumers of my content. but that was impossible with the comments section.

I’m not alone in this backlash. A few months ago, Popular Science stopped allowing comments on its online articles. As editor Suzanne LaBarre explained:

It wasn’t a decision we made lightly. As the news arm of a 141-year-old science and technology magazine, we are as committed to fostering lively, intellectual debate as we are to spreading the word of science far and wide. The problem is when trolls and spambots overwhelm the former, diminishing our ability to do the latter….

A politically motivated, decades-long war on expertise has eroded the popular consensus on a wide variety of scientifically validated topics. Everything, from evolution to the origins of climate change, is mistakenly up for grabs again. Scientific certainty is just another thing for two people to “debate” on television. And because comments sections tend to be a grotesque reflection of the media culture surrounding them, the cynical work of undermining bedrock scientific doctrine is now being done beneath our own stories, within a website devoted to championing science.

That’s an even bigger problem. People who feel entitled to their own facts muddy the waters of public belief — and thus, public policy — by spreading not only vitriol but misinformation. Other readers then take that as the gospel and repeat it in sentences that always begin “I read online that…” and the modern version of the old game of Operator takes on a new life.

But there’s one other aspect of the SpaghettiOs story that bothers me. At the time of the non-offensive tweet, there were about 11,000 people following the SpaghettiOs account on Twitter. Why? Who is so desperate for online content that they wait breathlessly for the next utterance from a canned pasta company?

Since you likely aren’t among those followers, let me share with you some of what you’ve missed from that account — these are verbatim from the last week:

Pretty compelling stuff, huh? Remarkably, since the bogus Pearl Harbor Day controversy, there’s been a 10% increase in followers to that Twitter account. I’ll bet many of them are waiting to over-react to the company’s upcoming Christmas tweet.