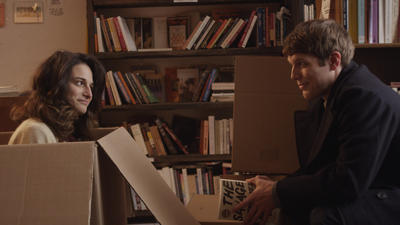 It’s ironic that the Supreme Court’s terrible decision in the Hobby Lobby case came down at the same time a movie called “Obvious Child” is in theaters. The ruling will keep lots of American women from having easy access to contraception, while the movie is about a woman who gets pregnant during a drunken one-night stand because she and the guy didn’t use a condom.

“Obvious Child” is different from other contemporary movies is that Donna, played by Jenny Slate, is not ready to have a child and knows it. In fact, at 27 years old, she’s not even ready to fully be an adult. So she makes the right decision to have an abortion.

While more than 30% of American women have or will have an abortion in their lifetimes, the subject is seldom discussed in popular culture. Katherine Heigl’s character didn’t even consider it in “Knocked Up.” Angie Harmon’s character on “Rizzoli and Isles” is now pregnant, but there can’t be any discussion of abortion on a TNT drama. At least in “Juno,” Ellen Page’s character researched the option and even went to an abortion clinic, but in the end she, too, decided to carry the child to term.

In a new CBS drama called “Extant,” Halle Berry plays an astronaut who spends over a year in space alone, yet somehow comes back to Earth pregnant. Granted, it’s not much of a series if she aborts the thing immediately after she discovers she’s carrying it, but why the hell wouldn’t she get rid of what is obviously some extraterrestrial life form inside of her? Does she not know what happened to John Hurt in “Alien”?

As for Donna’s choice in “Obvious Child,” Scott Lemieux writes for TheWeek.com:

Her decision is presented in a smart and refreshingly nonjudgmental manner. [Director Gillian] Robespierre, who is also the primary screenwriter of her directorial debut, makes the wise choice of not turning Donna’s pregnancy into some kind of special case that might justify abortion to people who are wishy-washy on the issue. Donna is not sexually assaulted. She doesn’t have a fetus with a defect. There was no broken condom.


Instead, the pregnancy results from a casual encounter — indeed, what appears at the time to be a one-night stand. Donna meets Max (Jake Lacy) after a show, and the couple fails to use contraception —- a nondecision explained in a funny, nearly surreal flashback sequence —- during a drunken hookup. The message is clear: Women should be able to experiment sexually without having to carry an unwanted pregnancy to term.

“Obvious Child” is not going to be a blockbuster, but it has received a lot of critical acclaim and will help advance the careers of both Slate and Robespierre, who prove they can make a movie that’s very raunchy, very clever, and even very touching. But I hope it doesn’t stand alone as a single example of what women on screen can choose to do with their bodies. Maybe it will take more women writing and directing romantic comedies and dramas to realize that.

Just as it will take more women serving on the Supreme Court to recognize that using contraception is not a matter for your employer or the government to decide.