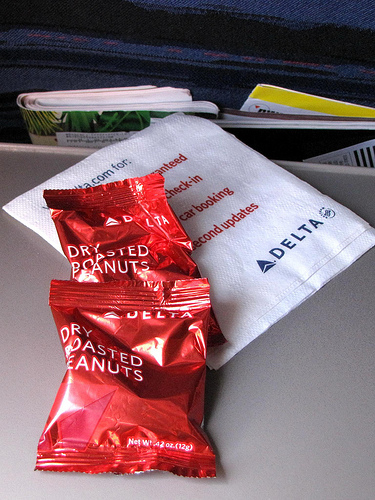 On a Delta flight this weekend back from a poker tournament in Lawrenceburg, Indiana, the flight attendant handed out pretzels and peanuts. I took one of each, branded with the airline’s logo by the King Nut Companies. Both packages included the printed warning: “Produced in a facility that processes peanuts and other nuts.”

I understand that we have a percentage of the population that is allergic to peanuts, some to the extent that a mere whiff of peanut dust can send them into life-threatening anaphylactic shock. Thus the warning on products like plain M&M’s, which are made in the same factory as peanut M&M’s.

But do you really need to put a label on a bag of peanuts that warns people about a potential peanut hazard? Considering that I was in the dumbed-down environment of an airplane, where (by law) passengers are instructed by flight attendants on how to operate a seat belt, perhaps a no-brainer warning is, in fact, necessary.

In that case, please do not attempt to use this blog as a flotation device.