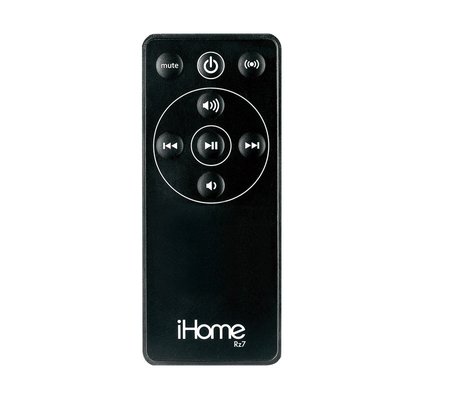 I’ve had the same Proton clock radio on my nightstand for about 20 years, but I recently replaced it because I also have an iPhone I need to recharge every night, and I was tired of the cord I’d used for 7-8 years which plugged into the wall. Since both my wife and daughter have iHome units, I finally broke down and bought one, moving the sturdy old Proton into my office.

The iHome does everything I want, but there was something in the box I can’t imagine ever needing — a remote control. For a clock radio? How far away am I going to be from this device that I’ll need a remote? We don’t have a Hugh Hefner-type gigantic bed that’s big enough to have different zip codes, so it’s not that much of an effort to roll over and turn off the alarm in the morning. Even if I did have a bed that big, why would I have the remote more readily available than the clock radio?

I mentioned this to a friend, and he said that he keeps his alarm clock across the room, so that when it sounds in the morning, he has to get out of bed to turn it off, which makes it more unlikely that he’ll hit snooze and crawl back under the covers for 10 more minutes. I understand that, but doesn’t a remote defeat that system? If the alarm clock is across the room, but the remote is on your nightstand, that would make it easier to turn it off, fall back asleep, and be late for work.

There’s an obvious need for remote controls for a television that’s across the room, because I’m old enough to remember a time without them, when you had to get up from your couch to change the channel and stand there until you found something worth watching (or, if your household was like mine, your parents told you to get up and do it — we served as their human remotes).

But for an alarm clock? I’m holding out for a remote-controlled stapler.