Not So Excellent Customer Service 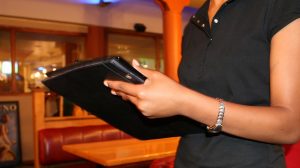 On Friday, I wrote about an excellent customer service experience I had recently. Today, I offer not one, but two examples of the other side of that coin.

My wife and I went out to eat for both lunch and dinner on the same day, a rare occurrence for us, and encountered similar problems at each of the restaurants.

At 54th Street Grill — where we like the soup-and-salad combo — the hostess, who we’ve encountered before, had us stand in front of her podium while she took several minutes to figure out which table we should be assigned. Then, after figuring out that puzzle, she engaged in mindless conversation with us on the way — and even after we’d reached our destination. She stood there continuing to talk, despite the fact that we were silent. She was not imparting vital information, like the day’s specials or something similar. She was merely babbling about, well, I have no idea what the subject was, because after realizing it was irrelevant, I stopped listening. She wouldn’t even take the subtle hints of us looking at the menus and not her. I wanted to tell were there for a meal, not a debriefing.

Finally, she left, and we sat there for another 10 minutes before a waiter showed up and asked, “Has anyone taken care of you yet?” Well, we still have our menus and there are no beverages on the table, so take a guess! To his credit, he was quite apologetic and then did a good job of taking our order, bringing us food, and keeping our water glasses refilled. I have a feeling it was the hostess’ job to let him know she had seated us in his section, although a glance by him in our direction would have revealed that secret.

That evening, we went to Cooper’s Hawk for a 5:45pm dinner reservation (it was either that or 8pm). We showed up on time, the hostess checked us in, then we stood there for nearly ten minutes while she also had to decipher the floor plan to determine which table to send us to. Like 54th Street Grill, the restaurant was practically empty at this point, with more than 40 tables available, but she had to assess the entire layout, which seemed a Herculean task. Finally, she found a place to put us, wrote my name on a card, and handed it with two menus to the other hostess, who then walked us to our table. Very slowly. I had watched hostess #2 seat a couple of other parties before us and each trip took 2-3 minutes, despite there being a line of people waiting to be seated. I think I discovered a flaw in the system.

The good news was that, once at our table, we had a wonderful waiter who was attentive and informative, without being overbearing. He would walk by and glance at us on his way to and from other tables, making us know that if we needed anything, he’d be happy to help. Thankfully, he didn’t come by every few minutes to ask, “Is everything all right?” — which too many servers do, timed perfectly to the moment we’ve just stuffed forkful of food in our mouths.

I know you want to chalk up these hostess issues to staff shortages in this era of The Great Resignation, but that wasn’t the problem, because neither place was very busy when we arrived. Once we got past those gatekeepers, everything went well and we left our usual generous tip.

This was a structural issue, yet another example of the people who designed the system not paying attention to how it works in real life. Both restaurants needed a secret shopper to report back to management about the traffic jams being created in their own lobbies because customers weren’t being seated in a quick and orderly fashion.

Moreover, in the 54th Street Grill instance, someone needs to tell that hostess to just shut up and keep business flowing to the tables. I know it can get lonely up there at the podium, but we weren’t there to hear her stories or converse about anything deeper than, “Wow, it’s windy outside.”