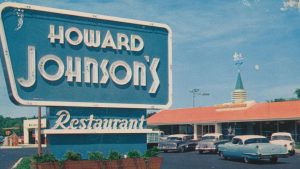 It’s been decades since I’ve been in one. For decades, they were omnipresent, particularly up and down the east coast. You couldn’t drive on any turnpike in the northeast without eventually seeing a HoJo, often at the rest areas. Merely spotting the chain’s bright orange roof caused a Pavlovian response for us kids in the back seat, followed by several rounds of begging our parents to please, please, please stop so we could have some ice cream.

However, as they dwindled in number, I can’t remember seeing a HoJo anywhere in my travels. The last outlet standing was in Lake George, New York, and I’m pretty sure we ate there during a family vacation in the 1960s.

There are still 300 or so hotels with the HoJo brand name (owned by Wyndham), but there’s now no place to get a hot dog on a square bun and a scoop of ice cream that comes to a point. I’m not sure if I’m nostalgic for the geometric shapes or the variety inherent in 28 flavors, but I recall my father loved the Swiss Chocolate Almond, while I was a fan of the Chocolate Chip, served in a silver bowl with a HoJo cookie stuck in it.

Long before Friendly’s or any of the fast food corporations moved into the Long Island town I grew up in, we had two choices: a local hamburger chain called Wetson’s and a Howard Johnson’s restaurant. We visited the latter every couple of months, which was as often as my parents’ budget permitted. With four mouths to feed, we usually went to take advantage of the all-you-can-eat spaghetti, fried chicken, or fried clams, each available on different nights. I distinctly remember the size of the plates getting smaller the more portions you requested, until the final one was about the size of a thimble.

When we ventured into Manhattan, we’d occasionally step into the HoJo in Times Square for a cone. That location later became famous as the starting point for Penn Jillette’s weekly Movie Night, in which he and a couple dozen fans had a bite to eat then walked to a nearby theater to see the cheesiest midnight movie he could find.

I feel particularly sad for the original Howard Johnson, who opened his first restaurant in the town of Rock Ridge, as memorialized in Mel Brooks’ “Blazing Saddles.” 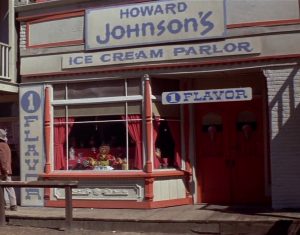