No Ventilator For You! 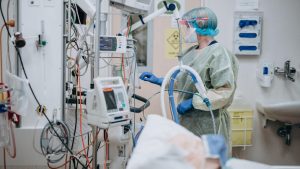 On March 25, I wrote a piece suggesting that all those who insist on re-opening the country should first contact the Carnival Cruise people and book a trip that will only include others like them — the ones who won’t wear masks and don’t socially distance. But it would have to be under one condition: that the ship’s crew, cooks, and cleaning staff not be forced to work in such a life-threatening environment.

Sure enough, after Carnival announced recently it will resume cruises in August, the company has been overwhelmed by customers who want to go — despite the horror stories we’ve heard about ships with hundreds of cases of COVID-19 infections. For those folks, I would add another condition: no one onboard may be transported to land-based hospitals’ COVID-19 units, nor use any of the equipment (ventilators, etc.) that are still in such short supply, until every other patient is cared for. If you get sick on a cruise, you go to the end of the line.

On April 20, after a re-open-the-country rally in Wisconsin — the one where nurses blocked the street to make it harder for protesters to attend — I predicted it wouldn’t be long before we’d get reports that some of those who attended (but didn’t keep their distance from each other) have tested positive for coronavirus.

Sure enough, there are now several dozen who became ill — and that doesn’t include those who have the virus but are asymptomatic. They, too, should go to the back of the line when it comes to scarcely equipped hospitals.

Here’s a very good op-ed by Dominic Sisti, Moti Gorin, Emily Largent and Arthur Caplan, who agree that people who protest against lockdowns have a moral duty to forgo medical care in favor of those who followed the rules:

One reason for COVID-19’s hyper-transmissibility is that spreaders can be people who are completely asymptomatic. The vast majority of Americans — Republicans and Democrats alike — fully understand this and have responded with a sense of solidarity and steely resolve. Most of us are diligently staying home, avoiding close contact with others outside our own households, and making essential trips strategically and efficiently.

Yet thousands of protesters appear to lack a full sense of the gravity of this once-in-a-century pandemic, which has crashed across the globe leaving death and battered economies in its wake. Or, they view the economic consequences of social distancing as disproportionate to the health benefits. The protesters fly flags and carry signs accusing their governors of heavy-handedness, of unjustifiably quashing their freedom and limiting their liberty. They interpret statewide restrictions not as essential public health strategies but as unconstitutional assaults on their individual liberty.

The unprecedented public health measures do indeed limit liberty and this does, and should, raise difficult questions about how to balance freedom with other values such as security and health. But during pandemics, where millions of lives are potentially at stake, the balance swings in favor of sensible and temporary restrictions on liberty.

If the protesters can’t be persuaded that they are wrong and their behavior is dangerous, they should own up to their political commitment and sign and carry a pledge stating they decline all medical care to treat COVID-19, should they fall ill if resources are being rationed. Patrick Henry’s famous proclamation, carried by many protestors, is “give me liberty or give me death” not “give me liberty and if that doesn’t work out so well give me a scarce ventilator.”