No Time To Think 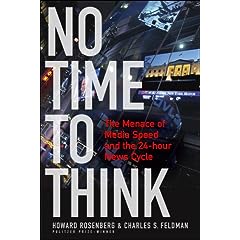 Yesterday on KTRS/St. Louis, I talked with Pulitzer prize-winning TV critic Howard Rosenberg about his new book, “No Time To Think: The Menace of Media Speed and the 24-Hour News Cycle.”

We touched on many of my pet peeves about TV news, some of which go back to the days when my wife worked in the business. We used to laugh when reporters did live shots from locations where the event had happened hours before and no one was left except for the TV crews (“we’re live from the courthouse tonight, even though this decision was announced 12 hours ago”). I remember Kim Hume (Brit’s wife) telling me a story from her time as a producer in the early days of ABC’s “Primetime Live,” in which they did a story about an old tree in Texas and, because the show had a mandate to do everything “live,” they spent thousands of dollars lighting the tree so it could be seen when the show aired — at night. God forbid they just use video of the tree from earlier that day, or week.

Another peeve: TV anchors who so hate silence that they have to fill every moment of live coverage by telling us what we’re about to see (e.g., seconds before Joe Biden was sworn in on Tuesday, Katie Couric felt she had to tell us that Joe Biden was about to be sworn in).

Rosenberg told a fascinating story from his book about a conversation he had with Ted Sorenson, who was an advisor to JFK, about how the Cuban Missile Crisis might have played out differently (and disastrously) in the midst of a modern media frenzy. We also talked about citizen journalists, whether opinions have replaced facts as the basis for news coverage, and his thoughts on the future of newspapers (he spent 25 years as TV critic for the LA Times).