A major debate ensued on my show today after a listener named Diane complained about a parking problem:

My husband and I took our 16 year old daughter to Hacienda on Manchester. Being a Friday evening, it was packed. After driving around for about 10 minutes, we parked across the street at Colonial Square (Cici’s Pizza, Blockbuster). There were “no parking” signs along the storefronts and mid-section of the lot, but none visible facing Manchester, so we parked there. When we came out after eating, there was a “club” on our front wheel and two young men stating we owed $80 cash or a tow and impoundment fee of $225. Rock Hill police are aware, and they patrol simply to keep somebody from going off on these “collectors”. They work for Abandoned Auto Alliance. I could see a parking ticket of $25 or $30, but $80 is insane. To add insult to injury, they attach a large orange sticker to your window and tell you, it will shred as you try to remove it and you will need a razor and soapy water to remove it. PLEASE HELP!

This seemed like a scam to me. Legal perhaps, but ethically questionable.

I can understand the property owner not wanting his parking lot to get so full that customers for his tenant stores can’t get in. The problem is with the sign on the lot, which does not say anything like “Parking For Customers Only” or “No Parking Except While Doing Business With [These Stores].” Take a look at what it does say on the sign: 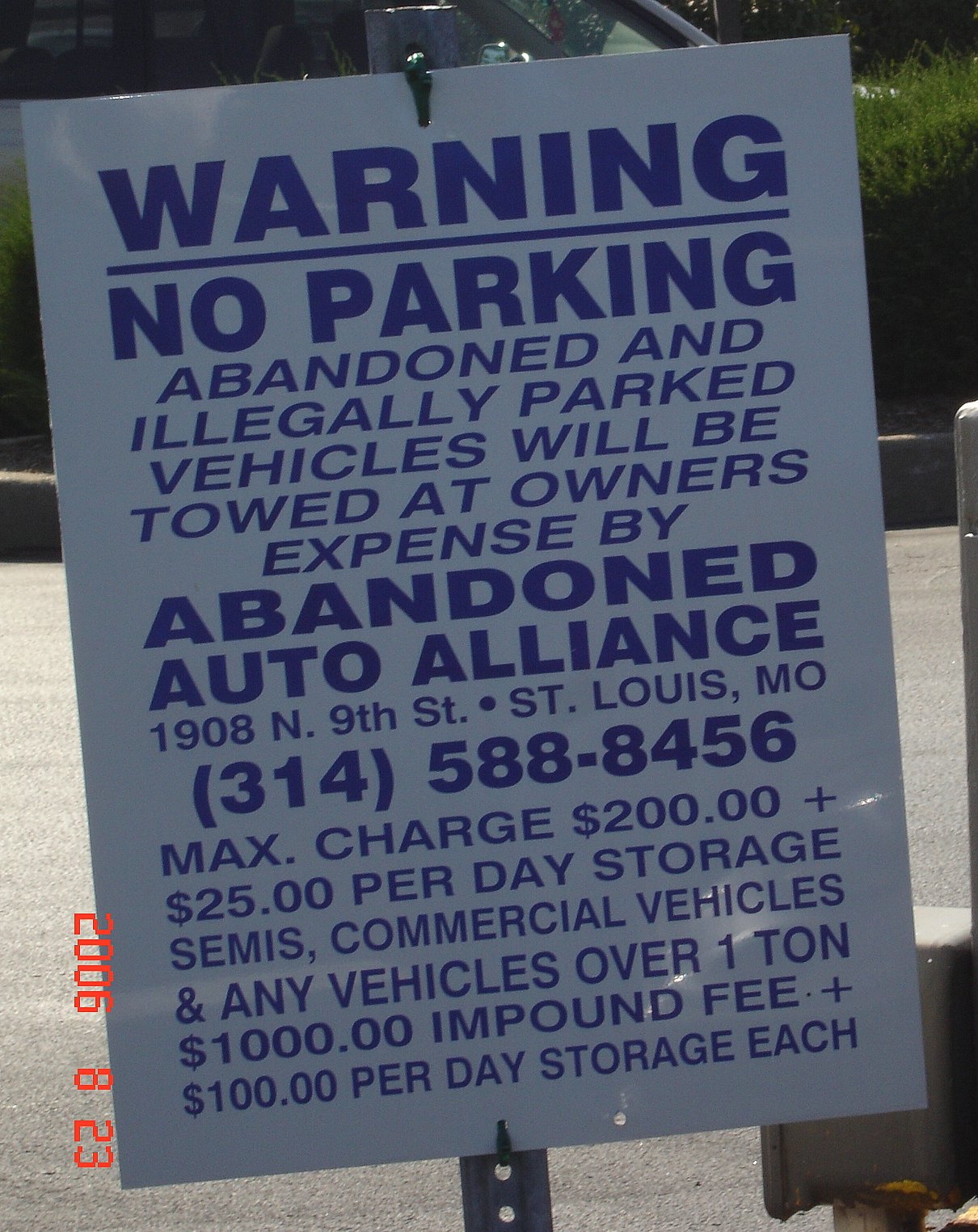 That photo was shot during my show by listener Michael Noble, who adds, “There are three entrances; main one across and on the East and West ends of the parking lot. There are two sign at the main entrance and signs on the east side, however the signage on the west side is missing, but the post is in place.”

I’d guess that most people pulling into that lot can’t read the sign as they go by. if they do, they must be confused by it. No parking?? By anyone?? What does “abandoned and illegally parked” mean?

According to Betty Crater, the woman we spoke with on the air from Abandoned Auto Alliance, “abandoned” means any car you leave in a parking lot — even if you just go across the street, you’ve abandoned your car. That’s crap. If I leave my car there with no intention of returning for it, then it’s abandoned. If it’s only there for an hour or two, it’s parked. As for illegally parked, I would take that to mean a vehicle that’s not properly within the lines of the parking space, as opposed to simply being on the property.

If the intention is to limit parking there to patrons of the businesses in that strip mall, they should say so, not hire a bunch of people who — according to Diane — hide in the bushes and boot your car as soon as you cross the street. I would also bet that the Blockbuster store has actually gotten business from people who eat at Hacienda, then go back to get their car and think, “Hey, let’s get a movie while we’re here.”

As you’ll see in the comments section, Diane is not alone in her experience in this lot, and lots of other folks have chimed in with their opinions and similar problems in other lots. Go ahead and add yours.

FYI, if you’re ever caught in one of these situations and want to report it to the Missouri Attorney General’s office, here’s the number: 800-392-8222.