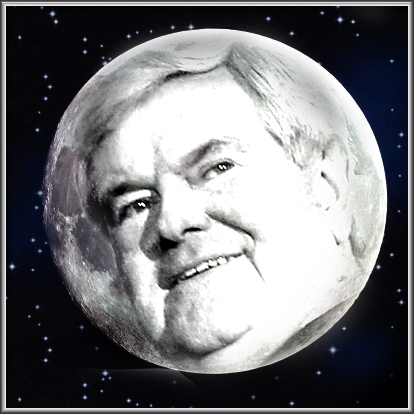 Newt Gingrich was mocked this week for saying, as president, “…by the end of my second term we will have the first permanent base on the moon and it will be American.” Forget the fact that we have an international treaty prohibiting any nation from declaring the moon “ours.” What about the whole moon base idea? Is it practical, affordable, and do-able? For those answers, let’s turn to astronomer Phil Plait:

A lot of the media have made fun of Gingrich for this plan. The irony is they’re doing it for the wrong reason. A Moon base is being likened to science fiction, just some silly fluff. But that’s grossly unfair.

Space exploration is an issue that’s important. It’s vital to our nation for a host of reasons, but it is also costly in every sense of the word. If we go, we should go for the right reasons, and we should do it the right way. If we go, we must go to stay. The budget for this can’t be set up on political election cycles, it must be based on the real constraints of engineering and technology, and far more importantly it must be based on a commitment to the future. If we do this, we must invest in the long haul.

Gingrich’s plan does not encompass that idea. Ineptly aimed media ridicule aside, what’s clear is that Gingrich’s speech was long on rhetoric but short on actual substance, something that tests well for the few days leading to the Republican primary in Florida (home of now-underused Cape Canaveral), but will snap if stretched to the presidential election in November. In other words, it sounds very much like a campaign promise made during a close race in a state that wants to hear that space still has a place.