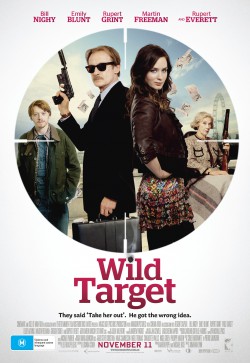 Since I mentioned Bill Nighy in yesterday’s review of “Their Finest,” I’m adding one of his lesser-known titles to my Movies You Might Not Know list: “Wild Target.”

Nighy stars as Victor Maynard, a highly-efficient hitman-for-hire. It’s a business he learned from his father, and his father before him — the kind of family where Victor’s mother keeps a leather-bound book with newspaper clippings of all his kills. One day, a new client (Rupert Everett) engages Victor to kill Rose, (Emily Blunt) a woman who conned him with a fake Rembrandt. Victor takes the job, tracks Rose down, but misses several opportunities to kill her. By the time he finds her again, she’s in a parking garage, where Victor notices another hitman taking aim at Rose. Victor takes out the competition, then helps Rose get away, but not before another guy (Rupert Grint) gets involved and joins the duo as Victor’s protege.
Not knowing that Victor has a contract to kill her, Rose hires him to to protect her. He takes her to his country home, smitten, but the outside world intrudes, with various people — including Victor’s mother and another hit man played by Martin Freeman — still trying to get to Rose.
If “Wild Target” sounds like a serious hardcore shoot-em-up drama, it isn’t. It’s a raucous black comedy directed by Jonathan Lynn, who made “My Cousin Vinny,” and gets terrific performances out of his stars. I think it’s Nighy’s best work, and Blunt stays with him step-for-step.
To see all the titles on my Movies You Might Not Know list, click here.