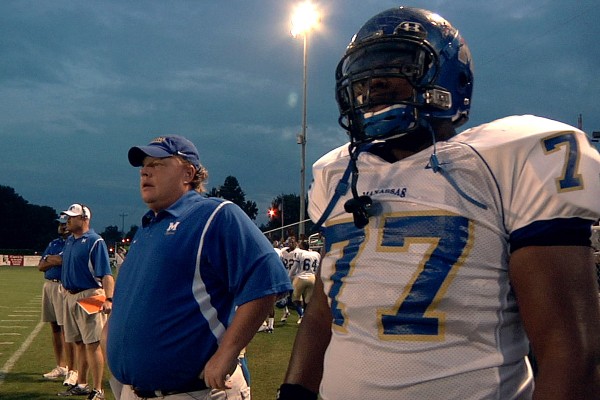 The last film I added to my Movies You Might Not Know list, “Searching For Sugar Man,” went on to win the Academy Award for Best Documentary. Now I’m adding last year’s winner, “Undefeated,” which is the best sports documentary I’ve seen since “Hoop Dreams” in 1994.

“Undefeated” is the story of Bill Courtney, the coach of the Manassas High School football team in inner-city Memphis, and his players, who live in poverty and need help if they’re going to get out and grow up. Courtney isn’t an employee of the school — he owns a lumber company — but volunteers his time to teach football, discipline, and character. It’s far from an easy task, considering that the team hasn’t had a winning season in years (in fact, it’s been a long time since they have won a game), and has never won a playoff game in the 110 year history of the school.

Courtney is enough of a central character for any movie, as he works with his players, talks to them, deals with the frustrations they present both on and off the field, and tries to give them every chance to succeed. But documentarians Daniel Lindsay and TJ Martin were fortunate to find terrific stories in some of the kids, too. There’s one who has a real prospect to play college football if he can get decent grades. There’s another who suffers an ACL tear that could keep him from ever playing again. There’s yet another who missed his entire sophomore year because he was in prison, and when he returns, causes so much trouble that anyone else would throw him off the team forever — but Courtney refuses to give up on him.

He’s a great leader of men, and “Undefeated” is a great documentary. You can listen to my conversation with Courtney about the movie here.