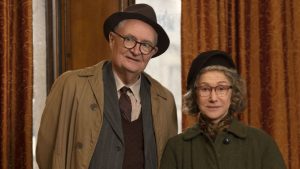 I tend to like movies about eccentric Brits. The most recent example was just six weeks ago, when I wrote about “The Phantom Of The Open,” starring Mark Rylance as an Englishman who managed to enter the British Open golf tournament — despite never having played the game — and proceeded to post the worst score in its history (read my review here).

Now, I’m adding a similar film to my Movies You Might Not Know list. It’s “The Duke,” which was released two years ago during the pandemic, so it didn’t get much attention. I had never heard of it until this week.

“The Duke” is based on the true story of Kempton Bunton, a 60-year-old man who, in 1960, couldn’t keep a job and had an ongoing battle over the country’s TV tax (which, to this day, requires Brits to buy a license in order to be allowed to watch television at home). The plot involves Kempton stealing a painting of the Duke of Wellington by the famed artist Goya from the National Gallery Of Art, ostensibly to hold it hostage until the government relents on the TV tax, at least for older people, or “pensioners,” as they’re known in the UK.

Kempton is exactly the kind of quirky character who makes movies like this so charming, especially in the hands of a veteran actor like Jim Broadbent, who gets a big assist from Helen Mirren as Kempton’s long-suffering wife, Dorothy. Director Roger Michell has proven himself to have a nice touch with light comedies (e.g. “Notting Hill”), and in “The Duke,” he plays the desperation of the Buntons’ financial situation (their only income comes from Dorothy’s work as a maid) against Kempton’s anti-authoritarian bent.

The movie builds to a delightful climax in the courtroom of the Old Bailey, where Kempton takes the witness stand and shakes up the system as he never had before.

I rate “The Duke” a 9 out of 10, earning it a richly-deserved spot on my Movies You Might Not Know list.

Now on DVD and streaming via several Video On Demand platforms.